Have Laptop, Will Travel - And Write.

One of the things I like best about writing is what a portable career it is. For example, this blog post is coming to you from the hallway of my church, where I am holed up while my daughter is in the sanctuary having a voice lesson. It got me thinking about some of the many and varied places I have carried my writing with me over the years. Care to travel down memory lane with me? 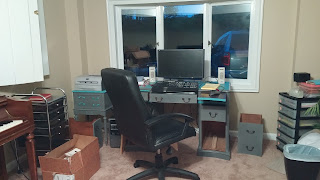 And let's not forget the many times inspiration and plot points have hit in the least expected places - the shower, the grocery store, in the middle of a sermon, during school performances, while cooking dinner - basically, anywhere and everywhere. My family has grown accustomed to having me stop them in the middle of something while I frantically jot a note on paper or dictate a memo into my phone. Sometimes they're not even embarrassed.

I've written on three continents, in at least seven countries, and in more cities than I can count. No matter where the road leads, it seems there's always a story - either one I bring with me or one I find there. Definitely one of the best perks of this gig.

similar to have a book/kindle, will read anywhere

Great post, Kris! I write in the car a lot during the summer, while my son takes a class or goes to a half-day camp. I can't afford to lose the writing time it takes to drive back home, and if there is no cafe close by, the car it is!

Oh yes, I have SOOOOO done that one!