Some weeks just don’t go quite like you plan.
Last week was one of those.  My husband and I had been planning a trip to the Preakness Horse Race for months.  We planned to meet some of the people he’d gone to school with at the Air Force Academy—people we haven’t seen in a gazillion years. 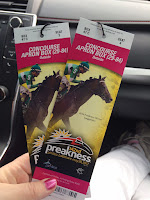 Early in the week the announcements came from Harlequin that they were restructuring the lines.  My heart hurt thinking about how hard I’d worked to get this far, and how much I still wanted to accomplish.  I worried about what was ahead.
Then in my day job, I had to cram five days of work into three.  It was crazy and I came home every night exhausted.
Like I said, it wasn’t going like I planned.
To top it off, I was getting ready to head home on that last day, packing up my laptop for work when it froze.  It wouldn’t turn off.  Wouldn’t restart.  Wouldn’t do a blessed thing.  Then the dreaded blue screen appeared.
Panicked, I ran down to IT.  They would have to keep the laptop to see what was wrong.   There wasn’t anything they could do.
Now, I was heading out for a few days of vacation, so I didn’t need it to work.  But I don’t like to come back to 100+ email, so I do look through and weed out the useless stuff and get my brain prepped for the next week sometime when I’m off.
But I wouldn’t have the laptop.  I’d be disconnected.  Completely.
We packed up and planned to leave early in the morning.  I was still in the dumps about my writing, and decided I wasn’t even going to pack a notebook.  It was going to be a short vacation, and we were going to be too busy for me to write anyway.  Besides, all good hotels have notepads available, and I’ve been known to write entire plots on coffeeshop napkins.  If all else fails, my phone has a notes app.
I woke up in the middle of the night and heard it raining hard.  Great.  It only got worse—when we woke up in the morning, we learned it wasn’t rain—it was snow!  I do live in Colorado, so spring snow isn’t unheard of, but—really?  We had to drive to the airport two hours away.
This week, this trip, was starting to feel doomed.
Sometimes, however, the universe knows what I need more than I do.


We landed in Washington DC to a beautiful sunny day.  We used the GPS function on my phone to find out hotel, and throughout the weekend.  Our friends were in our room visiting, so we didn’t turn on the television.  In the car, we were talking and laughing.  No phone.  No computer.  No TV.  No radio.

It’s been years since I’ve been that disconnected.  It was wonderful!!
And we didn’t even have to go to the boonies to get away—we were smack in the middle of one of the country's busiest metro areas.
The Preakness is held in Baltimore, Maryland, and is the second race in horse racing’s triple crown.  The Kentucky Derby and the Belmont are the other two races, which the Preakness is in between.  If it isn’t on your bucket list, it should be.  Just the experience of it.  The horses, the people watching, the fresh outdoors--it was all wonderful and a lot of fun.
I came home more relaxed than I’ve been in ages.  Yeah, the whole vacation helped, but honestly, being unplugged was a huge part of escaping.  I can’t recommend it enough.
Now back home, things aren’t all “fixed.”  There’s still a lot of uncertainty in my writing career and, yeah, I had over 100 emails waiting for me.  But I was rested up and I can handle it.  I’ll figure out something.  I always do.
Maybe we all should unplug sometimes, and not wait until the universe does it for us.  Just a thought.
Oh—and no I didn’t win my millions by betting on the right horse.  My horse was edged out at the end of the race.   But what fun it was to cheer him on while he was ahead!
And not do anything with my phone—but take pictures! 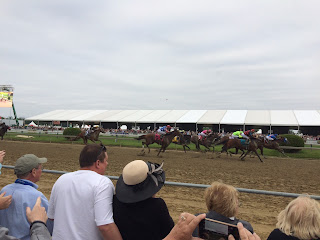 we just watch the Preakness on TV, but years ago--during those post-college years--we did the infield at the race. crazy times.