Writing: A Job You Can Take Anywhere - Dana Nussio

Educators do most of their teaching in classrooms and labs. Archeologists  dig on excavation sites. Even the President of the United States is forced to perform the lion's share of his/her duties from a big white house and inside an office that isn't even round. But writers? We can write anywhere. 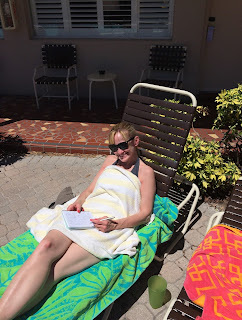 I came to this realization earlier this week as I sat scratching out words and scrawling new ones in a tiny spiral notebook while on a pretty nerve-racking flight (two really) from Atlanta-to-Detroit-to-Atlanta-to-Detroit. It started out that I was only writing in the notebook while waiting for the plane to reach cruising altitude, but that darn "Fasten Seatbelt" sign never clicked off, so my laptop had to remain stowed. Apparently, that was a good call on the pilot's part, that and the decision not to ascend to 30,000 feet since the cabin refused to pressurize. As passengers (and pilots for that matter) often lose consciousness at high-altitude situations when their lungs are starved for oxygen, I couldn't even fault him for returning our plane to the Peach State for repairs.

If I could draft words in that...we'll call it a heightened situation, I have to believe I can do it anywhere. 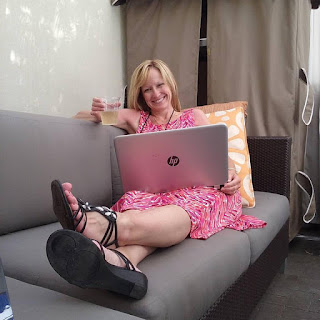 Over the years, I must have been on a mission to prove that point, whether I realized it at the time or not.  I've written stories in notebooks at the pediatrician's office, in the lunchroom at my day job and at more soccer tournaments and swim meets than I can count. I've tapped away on my laptop at hospital patients' bedsides, in a lovely cabana at Romance Writers of America San Diego and at my neighbor's awesome lake cottage in the middle of a snowstorm. I've even written on my AlphaSmart at poolside while my little girls splashed not ten feet away (lifeguard present, of course). 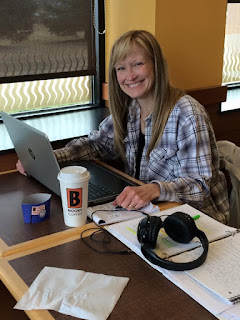 Sure, I work in my sunny yellow office and on my beaten-down couch where I'm typing now, but I've spent enough time  writing in coffee shops that I would expect a scratch-and-sniff page with the scent of good java to be included inside each of my novels. My March Superromance, FALLING FOR THE COP, particularly, should have the sweet scent of a vanilla latte as much of that story I wrote among coffee lovers.


Hmmm, from the number of locations where I've been driven to put words to page over the past fifteen years, you would think that I would have written more than just eighteen titles. But that's a blog subject for another time.


Often, though we creative types say we want to share our stories, we give ourselves too many excuses not to write. We're too busy. We don't have any free time. We're dealing with this month's crisis or still recovering from the one last month. But just as we must challenge any of these excuses if we truly wish for our stories to become more than daydreams that live inside our minds, we must accept that though no writing location is perfect, we can write wherever we make the effort.


Writers write. It's what we do. We have these stories inside us that insist on being released whether we're on our lunch breaks, summer vacations and even on airplanes limping back to airports.
There'll never be a perfect writing location. So just grab your laptop, tablet, notebook or phone and let the words and your stories flow. Any place is just write. 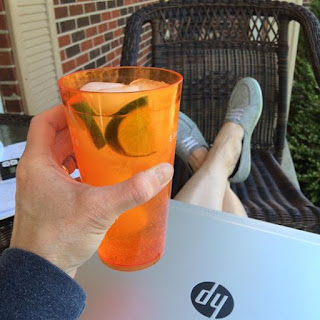 I've written on planes, in cars, in my office, and in my favorite comfy chair looking out over the backyard...at our library and Starbucks...even on our backporch in the swing. The strangest place (and it's not really strange, it's just odd)is at the pool while bebe is practicing.

You sound like me, Kristina. I finished FALLING FOR THE COP on my neighbor's porch swing on the 4th of July, while everyone else was celebrating. Had to be done. :)

You should take a look at rhetorical analysis essay example that would be a nice help for you in writing.