Saying goodbye is always hard to do.  And it’s even harder when you’ve never actually met the person.
As a writer, I meet someone new every day.  Granted, a lot of them are technically figments of my imagination, but still they’re full—living, breathing—people.  At least they seem that way to me.  (Other people maybe not so much.)
Over time, I spend a lot of hours with these people—sometimes more than with my real family.  I get to know them because I live inside their heads.  I hear what they think, see what they see—and sometimes do what they do.  (Research trips can be such fun!)
After doing five books in my CHAIR AT THE HAWKINS TABLE series, I’m now writing the last sister’s story.  Just saying that makes me sad.  Not that this is the last story for this series, but these brothers and sisters--and all their assorted friends and lovers--are finding their happy endings.  They’re moving on and I, well, I’m saying goodbye to them.
Oh, just like kids who’ve flown the nest, they pop in for a visit now and then, dropping by to tease or help a sibling in a scene.  But they don’t really come home to stay.  To be honest, I’m not sure I’d know what to do with them if they did.  I like their completed stories, the lives they’ve found.
One trick that many of my writing friends do to help them get into a character is to use actors/actresses as models for their characters.  Tons of us have “borrowed” characters from TV or movies to inspire stories.  It’s a great learning tool for one.  And it helps with the visuals.  But recently I found another benefit of doing that. 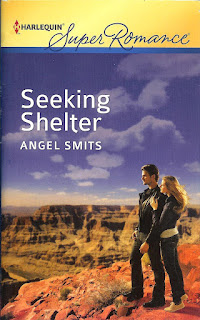 In my second Super Romance, SEEKING SHELTER, I used the actor Christian Kane as the inspiration for my hero.  His music, his looks and his voice were my hero, Jace Holmes.  Recently, my husband and I watched some shows that Christian Kane was in (LEVERAGE) and it’s like going back to my story.  My characters are coming home to visit!  Part of me wants to go back and write more story—a lot like wishing your kids were little again, I guess.
But just like my kids, I need to let my characters go and move on, even though the idea of writing a recurring character is tempting.  Besides, there’s always someone new to meet with a new story to tell.  And how exciting is that?

Sorry to hear that, I'm looking forward to reading this, love the cover,
Penney