Question of the Month: SuperAuthor Drinks 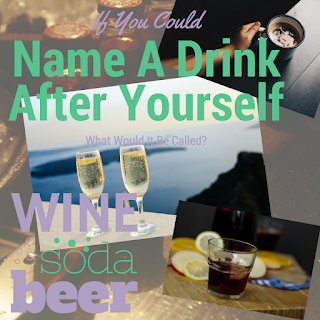 The Superromance Authors have a bit of spring fever (or maybe deadline fever, we aren't sure which) and are feeling particularly silly. This month's question, is definitely a silly one (but we hope you'll also find it delicious!), here we go:

Kris Fletcher: This one is a challenge, because I really don't drink much, but I guess that if I could name a drink for me, it would be called the a Laughing Maple. The ingredients would include maple syrup, Newfoundland Screech, and sparkling apple cider. Slightly sweet, kind of strong, and definitely bubbly - my kind of drink!

Amber Leigh Williams: Banana Pepper Rita - I'm copying the ingredients of your basic Agave Ginger-Rita. With its mix of simple ginger root syrup (for spice), lime juice (for a dash of sweetness), tequila (cheap for frugality's sake), an egg white (for substance) and salt (because who isn't a little salty?), it reminds me of the saying - "I'm spicy like a pepper but sweet like a banana!" Add a banana pepper for an amuse-bouche and salt the rim!

Kristina Knight: I have about two drinks a year, and neither is adventurous, so I'd create a non-alcoholic sort of a drink. Something with a little mint and cocoa (not much of a coffee drinker, either, I know, shocker!), and iced. Definitely iced. I found this recipe for Hot Cocoa Affogato this winter...and I think it should be renamed Kristina's Cocoa Delight because it's right up my alley!

Nan Dixon: I'm all about Prosecco and it mixed with--everything. So Nan's Spicy Sparkler would be -- Ginger Simple Syrup, Prosecco and maybe a dash of pomegranate syrup for color.

Jo McNally: This is a tough one! I'll go with Jo's Sparkly Irish Martini - edge the glass with sparkly gold sugar (because I'm all about the bling!). Fill halfway with champagne (because I have champagne taste), and top with Guinness (my beer of choice). Don't mix - the two liquids stay in separate layers (like my multi-layered life) until you drink. This is a twist on a yummy drink called an Irish Black Velvet. Perfect for St. Patrick's Day, which is a major holiday in the McNally household!

Jeannie Watt: Take a lot of money to the liquor store and buy the best single malt scotch you can afford. Go home and pour 1.5 ounces into your best glass. Add one drop of water to open it up. Sit back, sip and enjoy life. I call It Jeannie's Sanity Saver.

Claire McEwen: I'll be hanging out drinking with Jeannie...  because I LOVE a great single malt!
But, I also make a drink that I'll call a Clairita.  Mix tequila, limeade or lemonade, and soda water.  Add some sprigs of fresh mint.  It's so refreshing and yummy!

Anna Sugden: Great question! Hmm Should it be something related to shoes, or penguins, or hockey? Given my series, it should probably be A Perfect something … and definitely served on ice! Let’s go with A Perfect Fizz. Since Nan’s taken all the Prosecco (and she’s too far away for fight for it LOL), I’ll make it with Mio Sparkling Sake, a splash of apple juice, a dash of pomegranate juice and a slice of lime.

Heatherly Bell: This is easy, since I just did something similar on my page. I'd be made out of cream, pineapple and rum. Blend together with ice, serve with fresh chunks of fruit, and call me a Pineapple Bell.
Posted by Kristina Knight at 1:00 AM

A Pineapple Bell sounds like my kind of drink.

Jeannie - I like the way you think (drink?)! I'd choose Irish whiskey instead of scotch, but other than that, we could definitely be pals!

Am I the only one feeling thirsty now?

Makes me wish for a party with all my Supers sisters and our lovely readers, where we have a bar serving these drinks (and hunky men serving them!)