On Messy Desks, Not Empty Minds

Albert Einstein once said, "If a cluttered desk is a sign of a cluttered mind, of what, then, is an empty desk a sign?" I like that quote. Probably because my desk if forever in a state of chaos, at least according to RadioMan. To me, my desk is home. it's filled with things that make me happy, in addition to the things that I need to work on.

However, sometimes, I realize I need to clean it up a bit. This week was one of those clean up moments. Probably because I have a book due. ahem. My editor can ignore that sentence, it wasn't because of a deadline it was. . .some.other.reason.

Anywho. Here are a few things that I found on my desk that are making me happy lately.

The first is this stack of books. Why are they making me happy? Well, because they were all really interesting books - all were part of my reading list for the RWA Rita contest...and a couple are now one-click authors.

Then, there is our Year in a Jar. My family whined interminably about this project immediately jumped on board with this project last year. When something fun (like a vacation) or cool (like a new book contract) or exciting (like bebe's swim championships) happens, we write down the event on a piece of paper and put it in the jar. On New Year's Eve, we'll open the jar and read all about our year. I've seen some Year in a Jar projects that are filled with calligraphy and mementos. We use ticket stubs and scratch paper and usually abbreviations and really messy handwriting...but it works for us! 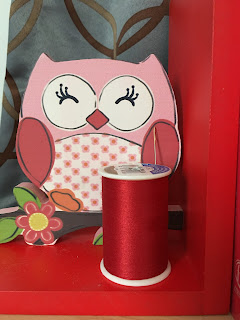 These bookends are new(ish). I bought them late last year because, owls. Yes, that's also a spool of thread and a
needle, I had to perform surgery on a beanie baby a couple of weeks ago. At some point, the thread will go back where it belongs, it's just that I have a feeling more surgery is going to be needed. Soon(ish). I keep print copies of my books here, because it's a nice reminder of where I've been...and of where I want to go next.

And I haven't found a single thing that needs to be tossed. 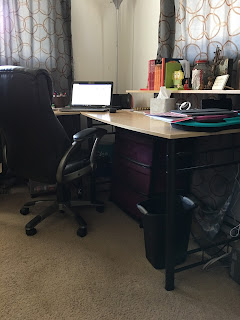 Although, I should probably put those books on the actual bookshelf instead of the corner of my desk. But, look, it's not all that messy...I mean, there's a whole foot or so of un-cluttered space to my right. Although my lapdesk could probably be put away. And so could my tablet sleeve. And, as I'm typing this, I realize I have about seven post-its and to-do lists to my left that aren't relevant any more. Okay, the old post-its and the to-do lists can go...but the rest of the clutter stays! I mean, Einstein was a smart dude...I don't want an empty mind, so I can't have an empty desk. Right?

So, spill, is your desk messy? Perfect organized? Somewhere in between? 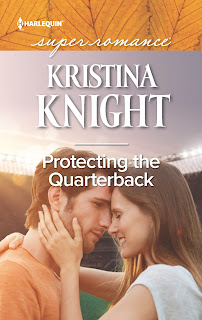 This is more than just a game … to her

Sports broadcaster Brooks Smith has always been more involved with the game than the players. But after she shares the spotlight at an awards ceremony with tabloid sensation Jonas Nash, one night of letting her guard down around the infamous quarterback spirals into many heated days and nights together when she gets assigned to the story of the year…

I share my desk with my son. So, as you do, I just shove his things into a desk drawer. All tidy!!!!

Ha! Yeah, one of these days, I'm going to have to go through my drawers, too. But that's for later. Much, much later!

I would say it is neat AND messy, both 50% of the time. The neat part makes me feel so much better, but there ARE times when you just drop stuff on there (and run out the door). If I've been away, then God help me for the next week or so while I try "finding" my desk again (let alone finding the entire house).

Drawers? Aren't they meant for how Mary handles it (with shoving things in and closing the drawer)? I could have sworn that's their purpose in life, LOL....

ha! totally agree on the drawer thing, Laney! and, gah, the putting away after trips is maddening. I swear things wind up in my office-in-a-bag that I never even packed.

Mine is an organized mess... I know where everything is, LOL!