Greetings from a frosty, but sunny Cambridge!

I know it's late in the month, but I'd like to wish everyone a Happy New Year. I hope that 2017 has got off to a great start for all of you.

I think everyone had a tough year at some point in 2016 and most of us were glad to see the back of it. For us, the last half of the year was difficult, as my beloved and wonderful 94 year old father-in-law, who had been active and pretty independent for 93 years of his life -- he even used to do his own cooking and cleaning! -- began to decline. Sadly, he passed away in November -- coincidentally on the same date as my late mother-in-law, to whom he was married for 62 years -- on her birthday! In the end, as hard as it was to say goodbye, it was a blessing that he was released from his struggles and we made sure to celebrate a fabulous life well-lived.

And there is plenty to look forward to. Time spent with our family, and especially our two gorgeous grandsons (the older aged 3 and the younger almost 4 months) always fill us with joy and optimism. It's hard not to look at everything through brighter eyes when you're with them! Just as we love seeing our nephews and nieces (aged from 18-30) take their places in the world and forge amazing futures, following their hopes and dreams.

Travel always helps refresh the soul. We have some great trips planned, revisiting places we love (like Amsterdam and Kelowna) and exploring some new places, like NovaScotia! Hopefully seeing dear friends in Green Bay and Florida and welcoming others from Australia, North Carolina and New Jersey.

We also intend to give our home a new look. Whilst I'm not looking forward to the upheaval, I know the end-product will be lovely.

As always, it's the best feeling in the world when one of my books comes out. I still pinch myself that I am lucky enough to do what I always dreamed of and write romances (especially about hockey!). It's even better when I realise that my February release is my fifth book!

A Perfect Strategy, the latest in my New Jersey Ice Cats' series, also looks at fresh starts. It features a recently retired, recently divorced player -- former Ice Cats' captain, Scott 'Scotty' Matthews, who has just lost his job as a media commentator. So much for the settled, new life he'd thought he'd have after hockey!

Pairing him with successful business consultant, Sapphire Houlihan, who appeared in A Perfect Compromise, probably wasn't the fairest move, especially when she won't commit to anything or anyone. But the attraction buzzing between the two was hard to ignore! 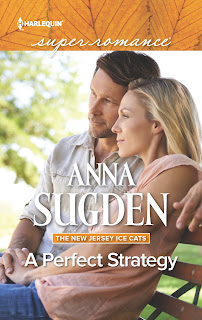 Is there really life after hockey?
If there's one thing Scotty Matthews knows, it's hockey. Unfortunately, the former New Jersey Ice Cats captain isn't proving successful at life after hockey. His wife's left him and he's lost his post-ice job as a media commentator. All he's got now is a big empty show house.
If there's one thing Sapphire Houlihan knows, it's that she never wants to be tied down to anyone or anything ever again. Unfortunately for her, a wonderful one-weekend distraction with Scotty turns into something much more complicated… Because he's a guy who wants way more than one weekend.

What about you? Which fresh starts are you looking forward to this year? What helps you to hasten out the old year and embrace the new year?
Leave a comment and one randomly picked visitor will win a copy of A Perfect Strategy.
Posted by Anna Sugden at 11:26 AM

Fresh start - say goodbye to the negative people in my life knowing that a new friend will come along.

For me, I am trying to relax... not let so much bug me as before... take a breath and let all of the bad roll off my back.

I'm actually just hoping for another great year. I know the world in general had a tumultuous year, to say the least, but my corner of the world was peaceful and productive.

That's an important decision, Marcie, and a brave one. Well done, you! I wish you strength and happiness in your fresh start.

I've been trying to do that for several years now, Colleen, and it's tough! My lovely hubby is a great one for helping me see what I can control and what I can't, which helps me not to worry so much.

Hugs, Kerri. I wish you every success in finding that new home. My lovely hubby's theme song is the Monty Python song - Always look on the bright side of life - and he believes that finding something good in every day really helps make life happier! Since I've started following that approach, I've found it works!

Thank you to everyone who stopped by.

The random number generator picked Marcie as the winner! Congratulations! Please send me your snail mail details via the contact form on my website or anna at annasugden dot com.