I have one child, a little boy, and he doesn't sleep well. He has incredibly sensitive hearing and wakes at the slightest sounds. We have been saved, recently, by a white noise app that we installed on an old iPhone, where we can scroll from ocean sounds to airplane noise to... the sound of a vacuum? Yes, apparently some people like to listen to that!

But despite the white noise, my son still wakes in the night and often asks if I'll come sit in his room while he falls asleep again.  After many years of this, I now know what supplies I'll need.  I bring my computer and my headphones and a blanket, and I plop myself down in his bean bag chair and get very cozy.  I'm always tired and wishing I was still asleep in my bed, but I make my situation better by indulging in one of my guilty pleasures — binge-watching shows.

My son's extreme sensitivities didn't come from nowhere. I can't stand violence, horror, or anything too angry or ugly.  So I stick with whatever fun, delightful, romantic shows I can find on Netflix or Amazon prime.  And over the years, I've watched many.  Here are some that I've loved.

Jane the Virgin: A spoof of a telenovela, about a family that loves telenovelas. Funny, ridiculous, sweet and yes... romantic. I love the chemistry between Jane and Michael, and the relationship Jane has with her family.

Miss Fisher's Murder Mysteries:  They do show murders, but it's usually right in the beginning of the episode so I can close my eyes and ears.  Miss Fisher is an unconventional detective in 1920's Australia. Just the costumes alone are worth watching for! She's a great character and I developed a massive crush on the police inspector she teams up with.  Because... well, here's a photo so you can see for yourself! 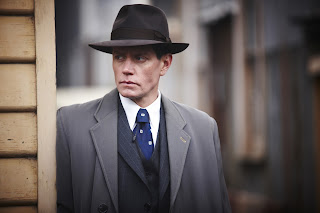 The Paradise:  A historical drama about the staff and owner of an early department store in London. That sounds kind of boring, but the characters are wonderful and I ended up cheering them all on.

Mozart in the Jungle:  First of all, Gael Garcia Bernal.  That's really all I need to say.  Such an amazing actor.  He was in The Motorcycle Diaries, which, if you haven't seen it, is a wonderful, must-see movie. Mozart in the Jungle is another show that sounds a bit strange at first.  It's about a wild and eccentric conductor who takes a job with the New York Symphony. But the characters are wonderful, the story line whimsical and the music is gorgeous. As is Gael Garcia Bernal... 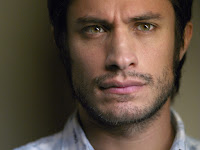 When Calls the Heart:  A wealthy young woman takes a job as a school teacher in a remote Canadian mining town. She falls for a gorgeous, stubborn mountie... need I say more?

The Crown:  Okay, so this is not as romantic as these other shows... in fact, it's unromantic really, because it shows the early marriage of Queen Elizabeth and Prince Phillip and apparently they got off to quite a rocky start! But it's fascinating to learn about the queen of England's early life, and what it must have been like for her to become queen at such a young age.

Hart of Dixie:  You've probably seen this one... I was late to discover it. But if you haven't, give it a try!  Southern romance, silly humor and eccentric small-town characters galore.  And very handsome heroes too!

Cedar Cove:  It's based on a series by Debbie Macomber and watching it is so relaxing. It all unfolds in the most gorgeous small-town setting. When the story feels slow (and it does sometimes) just hang out and take in the scenery!

Grace and Frankie:  It's not romantic, really, but the friendship that grows between Jane Fonda and Lily Tomlin's characters is just lovely. And it made me laugh out loud many times! So actually, it's not great to watch when you're trying to help your child get to sleep.

And of course, if you haven't watched Parenthood, or Friday Night Lights, they are epic, and so wonderful that they're sort of in a class of their own.

Are you a fan of any of these shows? Or are there others you like to watch? I'd love to hear your recommendations.  Because I have no doubt that the future will bring me many more late nights, nestled in the bean bag!

Oh, and completely unrelated to this blog post... I wrote a story for Harlequin's Free Online Reads and it's available here. I hope you enjoy it!

we are definitely binge-watchers -- Gilmore Girls was a fave...and we were late to The Office fandom, so we binged a lot of that. Oh! And I'm currently bing-ing This Is Us (because 1 show at a time isn't enough...I wait until I have 3-4 on the DVR!

I have to say I've watched most of the shows listed: Friday Night Lights (awesome), Hart of Dixie (awesome...I'm from Alabama), Cedar Cove (books and show, awesome), and I've just started watching Grace and Frankie. Looking forward to more seasons of The Crown. I'm all the time searching for new series to watch. Lately I've become addicted to Glee (it's actually pretty good). My husband watches Once Upon a Time (it's okay, but sometimes confusing to me with the story line switching back and forth). I'll have to look up the other titles you have listed here and give them a try.

We watched Hart of Dixie and are still watching When Calls the Heart. Good Behavior is kind of twisted romance and Castle and Lucifer are good mystery romances

My favorite binge show is Musketeers from BBC

Hi Tammy, Musketeers looks great! I'd never heard of that one! My nieces absolutely love Castle, I need to watch that. I'll look at the others as well. Thanks so much for the ideas. Hope you're having a great day!

Hi Savannah, It sounds like we have really similar taste in shows! I want to read the Cedar Cove books, now that I've watched the series. I wish it hadn't been cancelled, I was really sad about that. I tried Once Upon a Time and I got really confused too after a while! My husband and I watched Glee and really enjoyed it. The music is amazing!

Hi Kristina! I watched the beginning of This is Us but have got behind now. I want to keep watching it though, I really liked it. And I could watch Gilmore Girls over and over. In fact... I have! ;-) Just love that show. I've never watched The Office, but I've heard both the American and British versions are excellent. I'll have to add that to my list!

The last show I binged was Galavant, and oh, how I loved it. I don't really watch anything these days (le sigh). I did catch a few episodes of Grace and Frankie, and oh, how they had me howling!

Watched many of these! Now I need to see if I can find Hart of Dixie :) Miss Cedar Cove and SO happy The Crown has been commissioned for a second series!

I am a huge fan of the Miss Fisher's Murder Mysteries. Seen them all. The costumes are to die for. I have a crush on Jack too.

I loved The Paradise so much!! I was really sad that the series was so short. Now I'm hooked on Poldark. It's in between seasons right now but I have been enjoying it.

While I can't take anything overly violent, I do love the "strange" shows. Sense8. Stranger Things. Strange Empire. Long time Supernatural fan (Team Dean!). My Fella like American Horror Story but the only one I could watch was Coven (even then from behind my hands at times).

Janet, Laurie, Mary, Rachel, Kris, Everyone!! Thank you for your comments! It's really fun to hear about what you are watching. Janet, my husband loves sci fi and supernatural stuff so I recommended your shows to him. And Laurie, I love Poldark. Have you read the books? They're really good even though they were written a long time ago. Rachel, I'm kind of jealous that you haven't seen Hart of Dixie yet. I wish I could watch it for the first time. It's fluffy and fun and I had such a crush on Wade that I named a character in one of my books after him! Mary, I hope they make more Miss Fisher episodes. It's just so lovely. And Jack.... sigh.