Back To The Way We Were 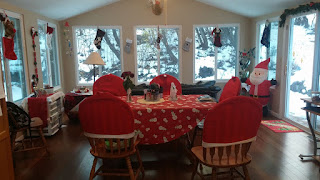 We were lucky enough to have two of our three sons home for Christmas this year, our first in our new house. Some things were very different as we faced questions that had never been an issue before, like - where do you hang stockings when you don't have a fireplace? (Our answer: in the windows.) Where do you put the tree in a house just big enough for the furniture you have? Heck, where do you put the extra kids in a house just big enough for four people and two cats?

Some things, of course, remained the same: Christmas brunch had the usual menu, there was a family trivia game while opening gifts, and yes, I managed to lose two presents before they made it under the tree. (Still haven't found them.)

But my favorite moment of things staying the same happened when my boys took their sisters sledding down the hill that goes right beside the house. I happened to look out the window in time to see my sons wrestling in a snow pile, rolling over each other as they tried to stuff snow down each others backs, or something similarly mature. I stood and watched, and suddenly, they saw me. And I swear, at the same moment, these two adult males - one of whom is married - both saw me standing there and immediately froze, their faces caught in that unmistakable expression that says, Oh, crap! MOM!

It was probably my favorite moment of the entire holidays.

That's the thing about families, isn't it? No matter how old we are or who we are in our everyday lives, when we get back together with our siblings and parents, we fall back into those old patterns. Those ingrained behaviors and habits are hard to change.

It's one of the reasons I love writing about families. Take a bunch of independent, successful adults, toss them in some kind of problem that makes them interact with their parents and siblings, add in the world's worst-timed romance, and voila. Instant trouble. 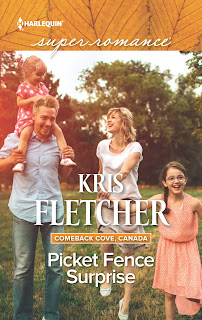 Of course, it's not just families that bring out our old  behaviors and habits, as any New Year resolution-maker can attest. In my upcoming Superromance, Picket Fence Surprise (yes, it's the one that required the last minute title change), that's one of the big issues between my couple. They both made some serious mistakes in their pasts, ones that reached beyond themselves and caused a lot of hurt to those they love. They're both in much better places now. Because they're both reinventing themselves, they can understand the other in ways no one else could - but they are also well aware of how easy it would be to slip back into those old patterns ...

Lucky for all of us, it is possible to make those changes. Though honestly, I hope my kids will always act like kids when they're together.

And I hope I can always put the fear of God into them with one well-timed look.

I love reading about families. It changes the dynamic of the book and makes things that much more "real".

I loved reading this post about your family and your Christmas holiday. Thank you so much and Happy New Year.

What a beautiful post, Kris! Love hearing about your family.

Oh how lovely, so nice to hear about your holiday! And I love the title of your new book!