Kids in my Books (And a giveaway!)

I hope everyone is having a wonderful holiday season—however you celebrate.
I’m still recovering, since in this season of sharing, two of daughters and their family were sick. They kindly shared their
respiratory ailment with me. A gift I can’t seem to give back. Hopefully, I will be able to kick it faster than the pregnant daughter! Probably from the kisses my granddaughter insisted on giving me.  How could I resist?

Next week, my fourth book releases—THE OTHER TWIN. The FITZGERALD HOUSE series is set in a B and B in the historic district of Savannah. In THE OTHER TWIN, two kids play a material part in this book. Writing the kids were fun. My editor, Megan Long, sent this note on the children. (It’s always nice to have words of encouragement.) 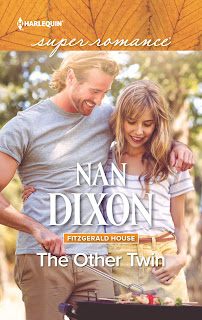 The kids are also particularly well drawn. I was really impressed with the way Josh was allowed to be a brat on the page, rather than a more typically sweet child who can do no wrong. I loved the way he's shown to be manipulative and angry - exactly the behaviour I'd expect from a child with his history. He's been through some horrible things and those things would of course have had an effect on him.

On the other hand, the little girl was harder to write, because she doesn’t speak for most of the book. I had to make sure she didn’t get lost in the scenes she appeared, since she didn’t speak. (You'll have to pick up the book to find out why she doesn't speak! :-)

Who can resist a neighbor in need?
Nathan Forester doesn't know the first thing about kids. So when the daughter he never knew existed arrives on his doorstep, he needs help, fast! His unlikely ally is next-door neighbor and single mother Cheryl Henshaw. Nathan and Cheryl don't exactly see eye to eye, but neither can say no to a helping hand.
Renovating Fitzgerald House is Nathan's chance to finally prove he's no longer the unreliable twin—and it seems possible with Cheryl by his side. Suddenly their practical arrangement has become something much more. Trust isn't easy, but they're stronger when they work together.

To celebrate the upcoming release—I‘m giving away a copy of the book—Print in the US—eBook outside the US.
To be eligible to win, comment with a memorable kid story. Either your own childhood or children you know.

I love kids in books! :) Amusing stories... when I was a kid, I was able to convince my friends I talked to a leprechaun that sat on my shoulder! I would babble on with fake words... it is funny to think back on! :)

I love that story Collen. Thanks for stopping by!

When she was 6. my daughter told me I have no personal style (they way I dress) Without batting an eye, I told her Comfort was my personal style. To this day (she is 18) we still joke about it) She thinks I dress like an old lady.

My son, then about 3-4, had heard us discuss genealogy and family trees. One day, he pointed to the magnolia in the front yard and asked if that was the family tree. I stifled a laugh and said yes.

Oh Tammy -- I know what you mean! I have 3 daughters. They would love to control what I wear!

Ahh dstouthholcomb - great to meet something from the magnolia family tree! Thanks for stopping by!

When my daughter was 4 we drove by a cemetery. She asked what the cemetery was and what it was for. As I braced for the fact that I had to explain death to her. I waited for real timb of asking me if I would die. All she said washe "Don't worry, Daddy will take care of me".

Your book sounds great!! I have a childhood story. We took our daughter to Disney World when she was around 10 years old, about 17 years ago. There was some sort of educational program going on and the kids were sitting in a circle listening. The presenter held up an old 45 record and asked the kids "who can tell me what this is?" My daughter's hand shot up and she said "that's a CD!" We all got a chuckle out of that one. I never forgot it. And once she asked the question, "Mom, why do we drive on a parkway, and park on a driveway?" Gotta love them. ( :

Laryssa - thanks for stopping by. I didn't like having to explain death to the kids. But your daughter had a great attitude!

Laurie -
What a bright daughter you have! (How many people would know what a record looks like today!) And she is so right on the driveway/parkway confusion. Thanks for stopping at the blog!

I have tons so I'll just tell a recent one. My daughter Emma (4yrs old) has started The Little Lying Phase (Which I hope I can cure her of soon). She got some glittery eye shadow for Christmas which only Mommy is allowed to put on. Her Brother told me she got into it so I went and checked and told her she wasn't allowed to do it by herself. She then said her Oldest Brother must have gotten into it (He wasn't here so that's probably why she chose him to blame. So I explained that she couldn't use it by herself and why and that she shouldn't lie and I knew her 12 yr old brother did NOT get into her Glittery eyeshadow and then I went to cut her fingernails (while we were in the bathroom) and she opened her hands and they were COVERED with what? you ask, It was,... Glittery Eyeshadow. She says "Look what someone did to me" Oh My! I sure hope I can break her of this.
Thanks for the chance. This book sounds Really Good. :)

I love kids books and so do my grandkids in Ca, my 15 year old I started her out with the Fancy Nancy books then she went to Harry Potter but my series that i liked for her is the Fancy Nancy Series so cute and age appropriate!

Linda -- that is such a great story! Amazing that someone could cover her hands with glittery eyeshadow! Too funny! Thanks for stopping by!

I love kids books too. Fancy Nancy! (so appropriate--Nan--Nancy!)