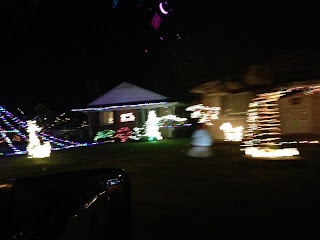 I love the holiday season. I know, a lot of people say that. I actually do love it, from the too-early store decorations to the fact that the All Holiday music channel started on November 1st this year instead of waiting until Thanksgiving weekend.

I love the shopping and the wrapping and the baking and the cooking...and, yeah, I'll hit a wall about December 9th and wish it was over, but by December 12th, I'll be back in the spirit.

Part of my love of the season is thanks to our daughter - she's 8 this year, and is growing up way too fast, but she still believes in Santa and the magic of the season. She's eager to see where her Elf on the Shelf will have moved to over night (I don't like the Elf...stuffed animals/people who move are wrong, just wrong), and, of course, seeing all of the lights.

One of my favorite holiday traditions will happen next Friday, the day after Thanksgiving, and it will be repeated at least twice during the season: the three of us will load up into RadioMan's truck and drive around to see all the lights. There are several big displays in our city, along with a couple of singing light displays. I make cocoa for the car cups, we turn up the Christmas music and drive for a couple of hours. My favorite is the Christmas Tree House because they put a light show to music (including some Charlie Brown songs - LOVE). bebe's favorite is still Magic Street - there is one neighborhood in our town (pictured pretty lamely above) where every house will be decorated. House lights, tree lights, blow-ups and yard displays. It's like Christmas has thrown up all over the neighborhood and it's the best.thing.ever. RadioMan's favorite is a drive-through display near the lake. Charitable organizations and school groups put up individual displays - everything from a light-up couple being married on a snowy hill to an automated Nutcracker, and even a lone soldier, standing guard.

We'll drive through the displays (not all of them every trip), and we'll talk and we'll sip cocoa and we'll sing along to the radio...and it's just about perfect (it would be over-the-top perfect if we could take a horse-drawn carriage through the snow to see the lights...so far that hasn't happened). What I like about it the most is that we're making memories that bebe will have through her entire life. She'll remember when the lights on the Christmas Tree House were just slightly out of sync and she'll remember when Santa jumped out from behind one of the displays at the drive-through park and she'll be able to see that entire street filled with twinkling lights until she's 80. And we will have those moments, too.

What about you? Do you have a favorite holiday tradition?
Posted by Kristina Knight at 1:00 AM

We do enjoy walking around the neighbourhood to see all the houses lit up at night. Pure magic!!

You'd LOVE our neighborhood, then! Just around the corner from us is a street where everyone decorates so much that people drive from miles around to see it. They have a "Jingle Bell Run" down the street at night and everything. They'll start decorating this weekend with bucket trucks they rent to string giant balls of light from the treetops. It's like walking through a Christmas tree, and makes the traffic worth it.

All of it - the decorating, baking , music, food and family time

For all the writers that's kind of dangerous to spend so much time in a static position, that's why every 40-60 minutes you should stand up for a bit of gymnastics even for a few minutes. find even more tips fro writers at this source

The event could not have gone more smoothly, and from my perspective, less stressfully. I was able to relax, let my hair down, and totally enjoy the party, and felt totally pampered and cared for by their manager. The food at Seattle Wedding venues was excellent, and the floral were gorgeous and reasonably priced.