It Always Comes Back to Romance 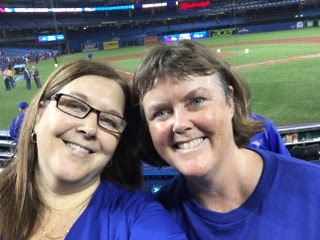 I feel I must take this moment to mourn the passing of Toronto’s beloved Blue Jays after their final loss to the Cleveland Indians last night in the playoffs to the World Series. It was not a pretty game, and the lack of offensive plays suggests we may not have deserved that Wild Card spot in the first place (but you didn’t hear that from me!).  What has that got to do with romance books? It seems everything comes back to romance books in my life. (Could it possibly be because I talk about it a lot???)

I worked very early to very early yesterday so I could be at the 4 p.m. game with my buddy Sharon who works for the Jays. We had excellent seats that were so close to the field, I felt like I was losing right along with our boys!

And then, of course, there was the after party for Jays and Cleveland staff and special guests (no players, L). Just the kind of party a cheap editor loves: plenty of free food and beer. And coming after the tragic death of the 2016 World Series dream, it was kind of like a funeral but without those little sandwiches.

At one point Sharon, who knew everybody, was standing beside a booth chatting to two women for quite some time while I ate my fifth dessert (chocolate and maple gelato, nice!). My back was hurting so I finally went over and rudely plunked myself down in the booth beside one of the women, a complete stranger to me. Turned out to be TV sportscaster Buck Martinez’s wife. Oops. Because I’d taken a seat, Sharon sat beside the other woman opposite. And then Buck Martinez arrived loaded down with food and I was sitting in his spot.

I quickly stood to get out of there but they squished in on the other side for me to sit three on a bench. And that put me face to face in a tight booth with celebrity sportscaster Buck Martinez. I was star-struck and red-faced and very, very warm. So of course I started talking about Superromance author Stephanie Doyle’s baseball romances and sex. You know. As one will.

And what always happens when a romance editor or author starts talking about romance books? You guessed it: one of the women admitted to me that she always thought she could write a book. I’d had a free beer, though, so I wasn’t about to break her spirit by revealing how many years of work and study usually go into an author’s first book. Heck, she’s sort of a baseball wife who just sat through a major loss. She doesn’t need me to teach her anything about hard work, perseverance and overcoming obstacles. She probably will write that book, and probably will make it to the bestseller list someday.

Oh, and Buck Martinez’s wife wants me to send her Stephanie Doyle’s baseball trilogy. Harlequin Superromance has made it to the Major Leagues! But then, I think we were already there.

I did think of you when I heard that the Indians were going to the World Series. But yeah for you bringing SuperRomance to the big leagues!

And I thought of your heartbreak as it became clear we were not going to turn this baby around! Ah well: next year.

Wait, Nan! I thought of the wrong person's heartbreak! It was Jo McNally whose heartbreak I should've been thinking about... I blame it on the mourning I am in.

Hey, don't forget my heartbreak! I stayed up until 12:40 am to see the Nats lose to the Dodgers last week! And I was really hoping Toronto would beat those Indians! Great post, Victoria!

Sorry for your loss... as a sports fan in general sometimes the further you go the more crushing the defeat is.

And thanks for the shout out!

Oh dear, so many broken hearts scattered across North America. I feel your pain, Lisa, and the whole staying up past midnight to lose...that is unacceptable. (The 4 p.m. game yesterday ended at 7-ish and it felt like 1 a.m. And when we left the party at 9 I couldn't believe I was out gallivanting like this on a weekday. But I was actually home in bed by 10. All the Buck Martinez rockstar partying threw off my system.)

The shout-out to your baseball books last night saved my hide in a conversation where I was quite literally out of my league. So thank you, Stephanie!

Aw. My buddy Sharon just sent me this romantic story about Buck Martinez and his wife, Arlene: http://www.postcity.com/Eat-Shop-Do/Do/July-2015/How-They-Met-Arlene-and-Buck-Martinez-were-married-40-all-star-breaks-ago. (In case you need a jolt of true life romance.)

So sorry for your team's loss, but what a great story! Love it that you just sat right down and started chatting!

My back was hurting, Claire! I'm old and decrepit. I will do anything to sit down. Especially when I'm in the middle of the ice cream course of my dessert.

LOL - I'm a TWINS fan. I've had heartbreak all season!!

I can hear your voice as you spoke to them in that booth! I LOVE it! So you. I'm so so glad we have you at the helm of our team! And so glad to be a part of the team. We will win for you!

I'm late to the party here, but Victoria, you know I was rooting for the Jays this week. Partly because you scared me when I told you I was a Red Sox fan (ha ha), but mainly because I grew up watching Toronto's farm team in Syracuse, and I really wanted them to take revenge on those Indians for Boston's sake! It sounds like quite an experience to have been at the game. There's always next year, right?

Great story, Victoria! You're such a fun and friendly person, so I'm sure they enjoyed the chat, too, even in tight quarters. And, you're right about people wanting to write. When people say to me, "I have a book in me," I always say, "Then let it out." We're so lucky that we not only let ours out but also that readers get a chance to enjoy our stories.

How fun, Victoria! And LOL! Good for you for holding your tongue instead of revealing the challenges involved in writing a book and bringing it to readers! ;)