The New Me (Tara Taylor Quinn)

There are so many aspects to a writer's life that your dreams to be a writer don't tell you about. You have to be business savvy. Promo savvy. Self-employed tax status savvy. You have to be able to spend long hours at the computer. You have to be content to work alone, and be a good public speaker, too. A hermit - and a social butterfly a few times a year, too.

I didn't know most of this when I started out. But I'm good with it.

And then there's the thing that gets me. The Headshot. I am incredibly uncomfortable sitting there with a human being standing in front of me staring at me from their microscopic lens. Who knows what they see? What others will see, in that one captured moment that won't be me at all. I'm not just one second in time. Or a still life. I don't want to be judged as one. I'd rather not be seen at all. I want my stories to be seen. And loved. They're the stars. Not me.

So I procrastinated. Years had passed since my last photo shoot, but I kept my hair style the same. I like it. I've always worn my make up the same. My size didn't change. And the lines the years have brought - the added wisdom - well I looked enough the same. And then my blissful choice to ignore that which I didn't want to deal with caught up with me. Or rather, time did. My headshot was so ancient it couldn't be used by modern technology. Pixels and things just weren't right. They were scanned print shots. Not digital ones.

I was told I needed to load a headshot for my publisher. Everything I tried got rejected. And I tried a lot of creative things. The dreaded time had come. I had to get a new head shot. About that time I had a brainstorm. Family gatherings in Ohio include a very gifted photographer. I saw her as family, not as her professional self so it had taken me a while to figure it out, but I had my godsend. I could do the photo shoot and at least not have to sit still and let a stranger stare at me.

I'm here to tell you I lived through the experience! It was the nicest, kindest, most comfortable photo shoot I've ever had. And after a post on Facebook this week, we have a winner from the many wonderful choices that resulted! So here you have it - the brand new me! 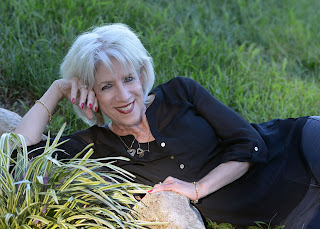 I hate having my picture taken. You did well. It's a lovely shot & you look so relaxed.

Thank you! It was more painful dreading it than actually having it done. A lesson I've learned in the past, but can't seem to remember!

Love the smile -- on your face and in your eyes!

Beautiful, natural pose. I love it. Thank you for tolerating having pictures taken for readers' sake.

I love your picture, it looks great. I totally understand what you were going through. I don't like to get my picture taken either.