Treasures from the Past 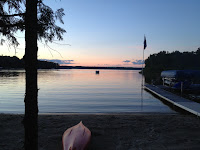 My sisters and I have a lake home/cabin that my parents built back in the 50s. When our parents died, the property passed to us.  As we cleaned out our childhood home, we sent photo albums and items that were family history to the cabin not knowing what treasures were there.
On Memorial weekend, one of my daughters and I were going through some old photos that my aunt had dropped off and somehow began looking at my Mother’s wedding book – appropriately titled—Orange Blossoms.
My mother and father’s courtship was unusual. My father was drafted near the end of WWII and was stationed near Gloucester England. Two days after arriving in England, he met my mother at a Red Cross dance on Christmas Eve. They dated until my father left for France in early April. Then they wrote  for three years while he was in France, Germany, the Philippines and then finishing the last two years of college!

On June 26, 1948 she arrived in New York City for a vacation. My father was auditing for General Mills on the east coast and met her as she came off the boat. She traveled with him as he worked. In Pittsburgh on July 24th, they were engaged, and instead of a vacation, she and my father married on August 5th in Minnesota. Of course only my father’s relatives were at the wedding. My mother was an incredibly brave woman to leave everything familiar and come to the US to marry someone she hadn't seen for almost 4 years.
What we found as we explored her Bridal book was that some of the mementos she received as gifts when she left England, were scattered throughout the cabin. They were gifts given to her to remind her of England.

Brasses depicting her 2 favorite Englishmen-Winston Churchill and William Shakespeare. A brass dinner bell that was always rung for meals at the cabin. And a warming pan-that used to hang next to the fire – but is now gone.
She also received a brass tray etched with Gloucester Cathedral.
All the things she talked about were always around the cabin—and I never realized how important they were to my mother. Reading her words was like bringing her back. I could hear the voice I still missed.

Do you have small treasures that mean a lot to you that you want to pass on to your heirs?

So many memories. My mother has a lot of wonderful 'treasures' that she is gradually handing out to family. She wants to do this now so that they go to the person the items will mean the most to. My mother is 91.

My scrapbooks dating back to the late 1800s - and especially including my daughter's recent wedding. I find the 12x12 pages hold 2 to 6 pictures easily (depending on the size, especially if cropped), but the usually brief words below explain the circumstances and names/relationships effectively. I am only up to 1992 at the moment (other than the wedding), but, God willing, I will become current within a few years....

My family has a couple of small pieces from my grandparents... sadly my uncle threw out a lot without telling us or sold it off. There was this one black and white pic of my grandmother that I wish I had gotten my hands on.

my grandma's wedding ring... the engraved pattern is Orange Blossom! I have a beautiful keepsake book which came with her ring, it has a lot of wedding sentiments in it, and it describes the reason orange blossoms are a traditional flower for weddings, dating back thousands of years in many cultures.

That's so cool your mother took a chance to leave everything behind for love.

That is so lovely Mary. My mother had a list of things in her jewelry box designated to different daughters. Thanks for stopping in!

Laney4,
Those scrapbooks must be amazing! late 1800s! (Maybe you when you're finished you could come and organize the box of pictures I have!!)
Thanks for swinging by the blog.

Collen - I sorry that your uncle threw out the pictures. The pictures my aunt brought over are actually from my aunt and uncle as their pictures and papers are being reviewed. I think my packrat mentality must be genetic - because this aunt and uncle saved everything! Thanks for dropping in!

Dstoutholcomb - Thanks for stopping over.
I think it was amazing that my mother took such a chance. They'd barely known each other -- 4 mos? But I think writing for 3 years cemented their relationship. We actually have the letters my mother wrote to my father. But my mother always destroyed her correspondence after she had answered it. I think that action was a carryover from WWII. Couldn't let anyone have possible information.

it's wonderful that you have that description of those items - I've been thinking that I need to make a record of information about some things around my house - which side of the family they came from and anything else I know for the next generations.

Thanks for stopping by Di.
Every few years I find something my mother wrote and it reveals another layer about how fabulous she was.
She was a poet - and one year my twins were required to read poetry in the grade school classes, so we pulled out my mother's poems and found a poem on the bag of shells that we had found in her tea trolley. It's titled A DRAWER FULL OF MEMORIES and opens --

It continues to discuss where she picked up each shell. Padre Island, Bondai Australia, Barricane Bay England, the Gulf and more.
Of course I was in tears after putting the pieces together.