What do these guys all have in common?

The obvious answer, considering the books I write, is that they're all retired hockey players. And they are. What you may not appreciate is that these are some of the toughest guys to have ever played the game. From left to right, top to bottom: Donald Brashear, Georges Laroque, Tie Domi and Stu 'The Grim Reaper' Grimson.

But that's not the whole story. Look again at the captions beneath their pictures. Particularly that last one. Yes, The Grim Reaper is a lawyer!

For many reasons, hockey players don't get the respect they're due. Anyone who doesn't follow the game, talks about the violence and the fights. Never mind that fighting is now almost as rare as those proverbial hen's teeth. Hockey players are described as mindless goons, often portrayed with their missing teeth, to look like they're somehow dumb and dumber.

Yet, these are some of the hardest working, most humble and charitable guys you'll ever meet. Sure, there are some jerks, like in any profession. But there are also a lot of men who are intelligent and innovative, who care for their families, their friends and their neighbours. Who use their skills, their brains and their fame to give back. You'll hear endless stories about the injuries and the concussions, the blood and broken bones -- especially about the players who did the damage. You won't hear so much about the fights to help others in need.

Definitely hero material.Some might even say, the cowboys of the ice.

Which is why I started writing romances featuring hockey players. [Okay and because I got the chance to do fab research ... ;).] And why my first book was all about not judging a book -- or a hockey player -- by its cover.

If you haven't read any of the New Jersey Ice Cats' series yet, why not start at the beginning with Jake 'Bad Boy' Badoletti's story in A Perfect Distraction?


Or check out A Perfect Selection, an anthology of 6 bite-sized holiday-themed stories featuring NJ Ice Cats' players. Today is the last day it is FREE on Amazon! 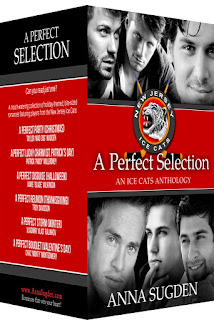 Tell me, have you ever met someone who you thought was nice or nasty, but turned out to be the complete opposite?

Yes I have A jerk who turned out to be a great guy.

The people I meet must be showing there true colors from the get go. No surprises.

Thanks for stopping by, Tammy! It's nice when that happens, isn't it?

Thanks for joining in the fun. Mary! Perhaps you're just a very perceptive person. :)