Writing into the Storm

Today it snowed.  How simple that sentence is.  How not simple this storm was.  I’ve lived here in Colorado all my life, and I’ve never driven in weather like this.  It was a full out blizzard.  Later I learned the wind gusts were 50mph.  We got nearly a foot of snow in places, but who could measure it with gusts like that?  Bare ground sat next to two foot high drifts.
I have a great little all-wheel-drive car, and I know how to drive in snow, so I took my time.  I wasn’t in a huge rush to get anywhere, but I did want to get home.  The idea of not moving, inside, where it was warm, definitely filled my mind. 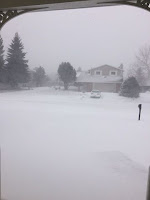 But as I drove on, I saw other drivers get stuck and spin their tires.  I knew it wouldn’t take much, and that could be me.  There were moments I couldn’t see the front of my little car much less the road beyond that.  I knew where I was, and yet it looked and felt so different.  I’d stop, wait and soon the swirling wind would move away and I could see again.  Then I’d put my foot back on the gas pedal and keep going.
Twice I had to turn around because they were closing the roads ahead of me.  There were a couple of times I had to seriously wrack my brain to figure out alternate routes that had the best option of not being closed yet. 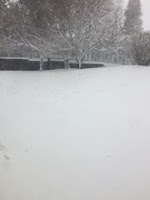 It was an experience.
And all that time, alone in my car, gave me time to think.  Since there was no one else to talk to, and the radio wasn’t playing anything relaxing between the road reports, I was stuck with me.
Driving today was a whole lot like writing my most recent book.  I got this great idea --leave early to go home—or like the next book in my Chair at the Hawkins Table series that I just finished—let’s write about a ballerina who is deaf.  (I never said all my ideas were good or easy!)
So how do we get this trip done?  Not easily.  Just like driving today, I started down one road, and there are things that didn’t work, paths that got shut off, or just didn’t look right or safe.  I played with all the things that needed to go wrong in my character’s life, I knew that she had to be tested and challenged.  I had a whole lot of things not work.
But just like driving today, I didn’t stop.  I had to puzzle through roadblocks and corners I’d written myself into.  The prize of getting home, of finishing the book was too tantalizing, too important.
When the wind created whiteout conditions, I kept driving, and when I had no idea what was going to happen next in the book, I kept on writing.  A lot of words eventually got thrown out and deleted, but I kept going.  Something on the page is fixable, nothing—is a whole lot like staring at that swirling snow and seeing only white. 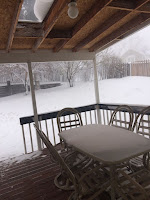 I’m so glad I kept going.  I finally pulled into my driveway, gunning the engine to get over the drift, and hoping I wouldn’t run into the freezer in the garage.  And I finally turned The Ballerina’s Stand in to my editor—only a “few” months late—hoping I’d accomplished what I set out to do, to write a solid romance about two people I’ve really grown to love.
The sigh of relief when I turned off the engine today was almost as deep and loud as the one I gave when my editor said she liked my story.

Hopefully, you’re safe and warm and home right now, and this is the last winter snowstorm we get for awhile.  I’m not foolish enough to think this is the last book I’ll struggle with, besides where would the fun be in that?
(My daughter took the pictures that accompany this story.  I was too busy white knuckling the steering wheel...but you get the drift...)
Posted by Angel Smits at 5:11 AM