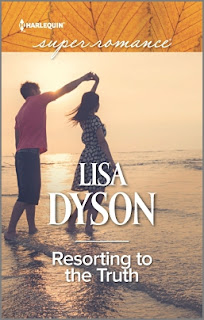 RESORTING TO THE TRUTH
Lisa Dyson

In love we trust…
She may have found the twin sister she never knew she had…but Charlotte Harrington also lost her mother. And now she's lost her artistic inspiration, too. Escaping to a lush tropical resort is her best shot at getting something of her own back again. She just needs to focus and somehow not let Sam Briton's guarded smile distract her.

Managing a hotel and single fatherhood puts plenty on Sam's plate, Charlotte gets that. And the suspicion in his deep blue eyes can only lead to big-time trouble for a woman who struggles with the truth. So why is she driven by the need to convince him that love is worth opening his heart?

From celebrity bachelor to…doting dad?
Movie star Riley Lee Jackson never forgot Kat Schwinn or their beautiful night together, but he's shocked to see her on his red carpet. Pregnant. With his baby. Suspicious of her motives, Riley promises to take care of her and their child, but nothing more.

Yet Kat believes there's something real between them. So she tries to make the best of this new life that she never asked for, filled with movie premieres and paparazzi. Because she knows Riley will do right by their baby girl. And because what she wants more than anything is a Hollywood ending in Riley's arms forever. 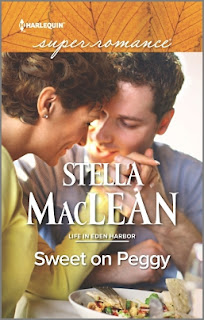 Risking it all for love
She doesn't believe in love at first sight. But Rory MacPherson could change Peggy's mind. The instant spark between them is undeniable. He's funny, charming and a single touch from him makes her weak in the knees.

But Rory's humanitarian aid work in Haiti has taught him to live life to the fullest, and his impulsive nature is at odds with the stability Peggy loves in Eden Harbor. When Peggy's confronted with her past, having an outlook like Rory's seems impossible. But so does letting go of the perfect man… 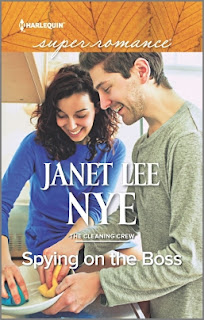 SPYING ON THE BOSS
The Cleaning Crew
Janet Lee Nye

The new guy's turning her into a hot mess!
A difficult childhood left Sadie Martin more interested in work than anything else, including romance. But she'd be a fool not to notice that her newest employee is scorching hot. As long as he works for her, though, he's off-limits. Her company—sexy guys who clean houses—comes first. So why are Wyatt Anderson and his adorable niece always on her mind?

When attraction turns into more, suddenly everything is a lot more complicated…and, frankly, a huge mess. What Sadie and Wyatt need is a clean slate. For understanding…and love. 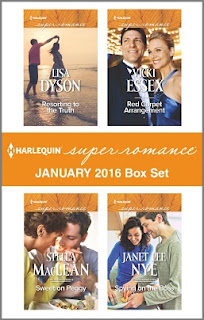 Harlequin® Superromance brings you four new novels for one great price, available now! Experience powerful relationships that deliver a strong emotional punch and a guaranteed happily ever after.

RESORTING TO THE TRUTH,  Lisa Dyson

SPYING ON THE BOSS (The Cleaning Crew), Janet Lee Nye
Posted by kris at 5:30 AM

What a great way to begin the year!!

I have already ordered some of these and am looking forward to reading them.