It's Freezing Here! I Want to go Back to the Caribbean!

It was twelve below zero this morning.  Hard to get out of bed on days like this.  Even the cat cuddled up with me.  Or he might have been trying to get me out of bed to feed him.

What a difference a year makes.  Only a year ago I was packing for a Caribbean cruise with my sister.  With humid 90s as the norm, we lived in shorts and swimsuits during the day. 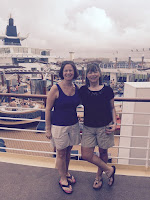 And we had a blast.  My hubby had always said he wouldn’t take a cruise and my sister’s husband was working with the North Dakota legislature, so we set off together – or rather we met in San Juan.  She booked her flight through Atlanta and I went through New York.  Our flight from Minneapolis to New York was almost an hour and half late, but the flight attendants assured us they would hold our next plane.  That was because almost a third of the people on the plane were heading out on the cruise.  (That says something about our weather in Minnesota.) 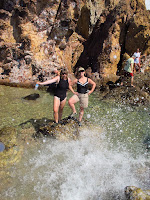 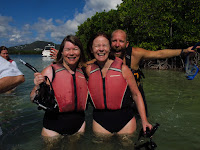 The trip was amazing.  Sailing out of Puerto Rico we visited five different islands, getting all the way down to Grenada which is close to Venezuela.  (I learned all about nutmeg on Grenada and wrote it about on the blog last year.)  And I was ready for relaxing.  I’d just released SOUTHERN COMFORTS Book 1 in the Fitzgerald House series last December.  And just last month I released Book 2- A SAVANNAH CHRISTMAS WISH.  I’m mentally ready for another wonderful trip—but I have Book 4 due at the end of February, so I need to keep my fingers on the keyboard.

I had never really known how some of the islands became US territories.   What I did find out was that the US purchased islands from the Dutch during WWI to make sure that if Germany took over Denmark, they couldn’t build submarine bases in the Caribbean.

I’d been on a short cruise to the Bahamas before.  On that cruise I was seasick, compliments of a leading edge of a hurricane.  But we had smooth sailing on the Celebrity Summit.  And they treated us like royalty.  They even had Prosecco at the coffee bar, my wine of choice.  Our cabin attendant was so much fun.  He was only supposed to make towel animals on formal nights, but since we were so enchanted, he did then every night! 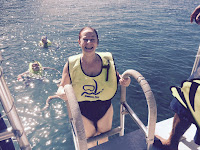 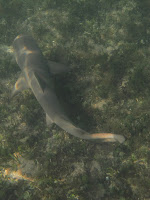 I went snorkeling for the first time and got maybe a little too up close and personal with sharks the second time we snorkeled in a
bay on St Thomas.  There were three nurse sharks hanging around as we snorkeled.  On that same tour we watched thousands of fiddler crabs converge on chocolate bars.  So much fun.

On our day at sea we indulged in facials and massages.  Every meal on board was fabulous and they were very, very careful with my allergies, even calling other restaurants we attended to let them know what I couldn’t eat.  It was heavenly!  I felt very pampered and spoiled. 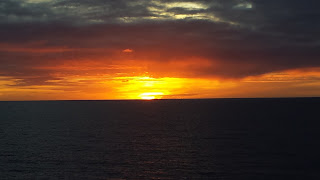 So here’s my question—what's your favorite way to be pampered?

It's very, very HOT here today. I'd gladly send some your way.

I love delicious bath products. My idea of pampering.

Oh Mary -- how hot is it? I love, love, love relaxing in a bath. Either with a cup of tea or a glass of Prosecco. Whenever the kids ask me for gift ideas, bath products are always on my list!
Thanks for stopping by!

So hot here too,!
Your cruise sounds wonderful, so much to see, do and learn.
My idea of pampering are changeable, right now I think air conditioning would fit the bill just fine.

Thanks for stopping by Audiothing!

Now you're being cruel about the air-conditioning. We have warmed up to a balmy 0 degrees (Fahrenheit) But it feels like 11 below with the wind chill. The cruise was a blast!