This week, I delivered my third son to the airport for the biggest adventure of his life thus far. He's embarking on a six-month co-op position in Peru, in a town not far from Machu Pichu. His excitement over this journey was something wonderful to see, even if I was watching through those damned Mama tears.

All my children are eager travelers, ready and willing to explore new lands, see new sights and hear new sounds. My boys, especially, are undaunted by the differences and challenges they might encounter. I think a lot of this might be due to the fact that when we adopted our first daughter from China, we took all three boys with us. In China, EVERYTHING was different, from the food to the facilities. (Ahem.) My suspicion is that at some level, the boys know that no place they could visit will ever challenge them that same way. (Or treat them as rock stars, which is what happened to our very very blonde third son.)

I try to blame - er, attribute this to my husband's influence. (There's a reason his nickname is Travel Agent Ken.)  But the fact is that back in the day, Mom had a bit of an adventurous streak herself. I give you Exhibit A: 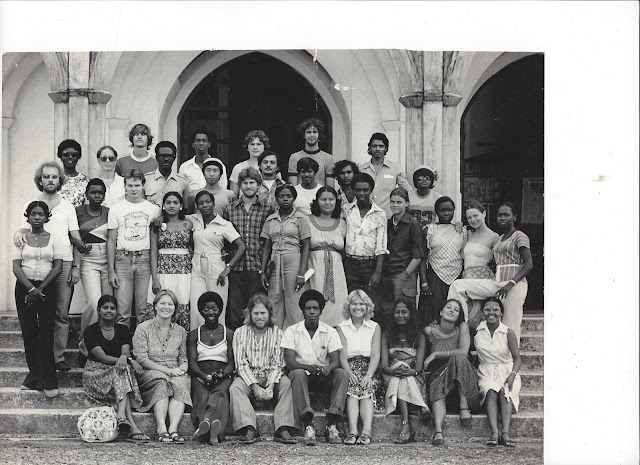 When I was 18 - just a couple of years younger than the child now in Peru, though I was a lot less prepared than he is - I took part in an exchange program called Canada World Youth. For eight months, the folks in the picture were my family. Half of them hailed from Canada. The other folks were from Guyana. We spent four months in each country, volunteering in various agricultural and social service facilities, learning about each others' worlds, and getting an idea of what it means to step outside your comfort zone.

It was an amazing, life-changing experience. And while I couldn't understand it at the time, now, of course, I can comprehend what a huge step it was for my parents to let me take part in this exchange. My parents lived in the same small Southern Ontario town where they had been born. Other than one aunt, who moved to California, all of their relatives lived within a twenty-mile radius. Our idea of a huge adventure was to drive two hours north to stay at a cottage for a week.

And yet they let me go to Guyana. Before cell phones, smart or not. Before Skype. Before home computers and Facebook and the flight trackers that let me follow my son's progress in real time.

Oh, and did I mention that a month after we arrived in Guyana, this small South American country was abruptly catapulted to the attention of the whole world thanks to this little incident known as the Jonestown Massacre?

I survived, obviously, though I don't know if my parents ever forgave me for putting them through that. The odds are that my son will also have an amazing, life-changing experience in Peru. (Preferably without any massacres, thank you very much.) I guess I will have to take some of the blame - er, the credit - for him being so ready and willing to head out on this adventure.

Which reminds me ... I never talked to him about the cockroaches ....


I know what you're thinking: which one of that motley crew is me? Take your best guess. If you guess correctly, you could win a $10 gift card to the online book store of your choice. (If there's more than one correct guess, the winner will be determined by a random drawing of all those who got it right.) Prize to be awarded January 21. Good luck!
Posted by kris at 5:30 AM

What an amazing experience.

I'm going to say you are the girl on the side wearing the strapless??? top.

I agree with Mary... the one wearing the strapless top.

I think you are the second girl from the left sitting down.

Wow Kris that was quite the adventure. I think parents and family will always worry if someone is off on an adventure.

I'm thinking second girl from the left sitting down, just like Kaelee's guess. :) I would have loved to have partaken in an adventure like that! My biggest adventure was backpacking for a month in Jasper and Banff :)

So amazing! And so hard to have your children head to a foreign country. My oldest son got robbed in Thailand when he was staying there for 6 months. Really hard to help from thousands of miles away.

I agree with Kaelee and Snookie: second girl from the left sitting down.

Nan, NO! Don't tell me that! :-) I had a hard enough time when my oldest called me one afternoon from Spain, "Hi Mom. I'm kind of lost and can't figure out how to get back to the dorm. Could you go on Mapquest and get directions for me?"

What a great experience you were privileged to have. I too think you are in the first row, second girl from the left sitting down.
Lauigl [at] carolina [dot] rr [dot] com

You are the fourth girl from the right seated. Who can miss that smile!