Getting The Job Done
Angel Smits

Putting words on the page is the writer’s job.  Creating scenes, people, places and events that at least seem real are the tasks that we work on every day.  So, if it’s something we do, that we want to do, why is it so hard?  If I could answer that, I’d probably be rich—or at least have more time to write since I wouldn’t have to work that pesky day job.
I’ve tried a lot of different things over the years to get the writing done, and one thing I’ve learned is that rituals help.  My brain is a creature of habit and it's not like I don't want to do it. There's just a great big world out there that gets in the way.
If I waited for inspiration to strike, or for just the right word or idea to pop into my head, I’d be sitting in the corner somewhere, covered in cobwebs and not a single book to my name.  Instead, I push myself with some specific “tools.”
For one, I use the same computer to write all my rough draft.  My laptop is a tiny, little thing that I’ve had for over five years.  In the world of computers, that’s ooold! 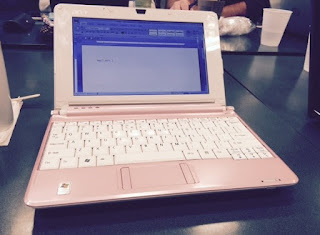 My husband bought it for me for Christmas, (probably when I was complaining about some stupid computer glitch) and I’ve been using it ever since.  It’s pink, so it calls to me, and the keyboard is a size my small hands can deal with without pain.  Also, it is clueless as to what the Internet is...so no interruptions there.
I used to use it mainly when I traveled, or went other places besides home to write.  But I have been using it at home for my rough draft for awhile now.  My main PC doesn’t get much use at all.  (Social Media is a whole different blog post…)  When I try to use the PC to write, I mainly sit at it and stare at a blank screen.  My little laptop apparently holds the magic, so you’ll see me, at my computer desk, in my office with the big computer on.  (My music sounds a lot better out of the big speakers—the sound quality is my little computer is its only real fault.)  The laptop fits perfectly in the spot where my keyboard sits when everyone else uses it.  Yeah, my family makes fun of me.
The other ritual I’ve developed is my Thursday night writing group.  It’s a very unique group, and when I look back and realize we’ve been meeting since 1999—I panic a little about my age.  But without this group, I wouldn’t have accomplished a big chunk of what I’ve done.
We do what we call improv writing.   We meet for two hours.  Someone leads (we do a round robin) and we write to three different prompts.  We keep them vague so all genre’s can use them.  And we don't make anyone write to the prompt, it's just that, a prompt.  Use whatever it sparks in the brain.  We write stream of consciousness for a five minutes warm up, then for ten minutes, and then after a break, (because of course, we must have coffee) we write a bit longer, about twelve minutes.  And while that might seem like a normal writing group, we have a twist embedded in there.
After each writing spurt, we read aloud what we just wrote.  There’s no critique allowed.  (Unless, of course, it's so wonderful you can't hold back.)  Not even self-critique.  This is rough draft, after all.  We know each other, and we’ve established that this is a safe zone.  The freedom to play is a cornerstone of the group.
Even when it’s not Thursday, if I take my little pink laptop to the coffee shop where we normally meet, especially if I’m stuck, and sit down--the words flow.  My brain kicks into that gear.  I may use some of the prompts.  I reuse ones we’ve already done, or leftovers from times I’ve run the group.  I keep them handy, just in case I can’t get a kick start.
Many authors use the same pen and notebook.  I have done that in the past, but the bad part about that is that pens run out of ink and notebooks run out of pages.  And danged if I can ever find a duplicate of the one that worked so well.  I’ve read about sports figures who wear the same socks, or don’t shave during the playoffs.  I wonder if it’s the same type of thinking that makes them  better.
Yeah, I know that someday my laptop may die--insert horrified gasp here.  But I have a son and husband who have resurrected it once already.  Why else would I help pay for two computer degrees?  I made them swear they’d always be available for the future.  Yes, I saw their eye rolls.  I ignored them.  But they are committed now.
Writing is, to me, what defines me.  It’s who I am.  Those other things?  The day job?  The business?  Those are just hobbies to support the reality of who I am.  (And fodder for the next book idea.)  I’m fairly certain that if it took standing on my head with my eyes crossed to write a story…I’d do it.
But I really hope it doesn’t come to that.  That would not be a pretty sight.  I'd love to hear about other people's routines or rituals they use to get things done, writing or otherwise.  I can always use a new trick.  I have a manuscript due soon, and my little pink friend is getting quite the work out.
Posted by Angel Smits at 4:39 PM

I have an old printer that I love... have tried some others in between, but they either broke down or cheat me out of ink... saying they are empty before they really are... As for the old one, I will use it till I can no longer find the ink for it... but it is getting harder to find. I love items that work for a long time... that are dependable...
Routines... I am not a writer, but I am a big note taker... my desk is full of them, LOL!

I've had to buy a new printer when I couldn't find ink for it. I wish you could buy a print and be abler to print using just black ink.. not be required to buy colored ink unless you want to print in color.

I love your pink laptop. My children are always on at me to upgrade things around the house, but if it works for me WHY????

I SO agree. Everything's always changing on me anyway, why volunteer for it. :)

I'm a huge fan of the Thursday night idea. And the pen and paper thing is one of the best "getting unstuck" rituals I have.