She’d only crossed a few yards of lawn before she heard a grunting noise, coming from the edge of the pines to her right. She turned, eyes widening at the sight of the miniature donkey, nibbling on the dry grass, tail swishing, looking completely at home.  He lifted his head and met her eyes with his big dark ones, and his ears pricked forward in curiosity.
“Oh no,” Mandy breathed in horror, taking a careful step back.  The donkey took a few steps toward her.  “No!” she called out.  “Shoo!”
But the donkey evidently hadn’t been trained in those commands, or maybe the huge cake in her hands looked far too interesting to resist, because he broke into a jaunty trot and headed her way.
“Go away!”  Mandy shouted and took another step back, stomach lurching as the heel of her boot caught on the raised root of a pine tree and she staggered backward, clutching the tray in desperation as the cake careened to the side.

This scene is from a new book I’m working on, and I've had a lot of fun writing it. The heroine, Mandy,  has made her sister’s wedding cake, and it's a work of art.  She’s carrying it across the lawn to the reception, which is going on in one of their barns, when a miniature donkey that she’s rescued gets in her way.  She falls. The hero, Arch, comes out of nowhere and catches the cake.  And off we go on into what I think will be an extremely romantic story!

Before I wrote the scene, I imagined the wedding cake.  The bride and groom are both cattle ranchers, so I decided that the bottom layer would be coated in images of cattle drawn in icing.  On the second layer there would be pictures of horses and mountains because the couple loves to ride in the mountains that surround their town.  And the top layer would be covered in hearts and flowers to represent their love.  Frosting around the edge of each layer would be shaped to look like little horseshoes, for good luck.  And two pairs of cowboy boots, made from hardened sugar, would grace the top.

And then I thought, does anyone really make cakes like this?

So of course, I Googled.  I typed in cowboy wedding cakes and clicked on images and oh my goodness, the creations that appeared on my screen far surpassed my writerly imaginings!  Here’s the link, so you can see what I came up with.

And here are a few of my favorite images. I thought the boots and hats were adorable on this one, though it isn't the cake I imagined for my book. 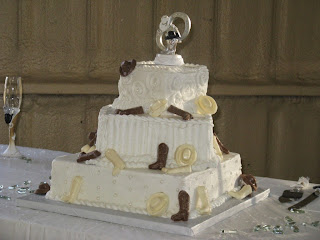 And this one has sides made to look like saddle leather! 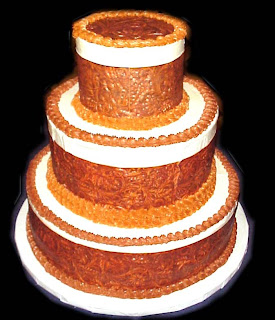 I love this next one.  It looks like someone painted with chocolate!   When I found it I thought that, while it wasn't exactly what I'd pictured,  Mandy's cake could look something like it. 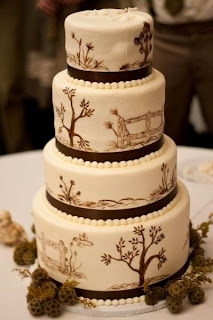 And then I found this photo.  And it was the closest to what I'd pictured.  Not the horses and cherubs, but the way the icing is used to make the pictures.  So this, to me, feels closest to the cake that Mandy drops and Arch catches. 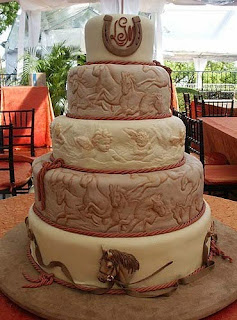 Aren’t these wonderful?  I’m not a baker, in fact I’m pretty hopeless in the kitchen in general, so these all seem magical to me.

And now I have some questions for you all.  Have you ever created a really creative cake?  Or attended a wedding where there was a cake like one of these?

I’d love to hear about it because I’m fascinated by these elaborate cakes! So fascinated that I added a bunch of cakes to my Pinterest Page.

Oh, and the book with the donkey and the wedding cake?  It’s currently titled The Rancher’s Freedom and it's going to be published in the fall of 2016.  It’s the third in a series - there are two other connected books coming out prior to it, both in early 2016.  I’m so excited about this new series, and very challenged by the complicated characters!

I’ll keep you posted on my progress. But for now, thanks so much for joining me on the SuperAuthor’s Blog today!  I wish we could all sit down for a slice of delicious cake together.

What pretty cakes. I love cake! So excited too that you have a new book coming out. I love your books.

I have decorated a few cookie cakes I have made over the years... never took the time to decorate a regular cake.

Thank you Tammy! I do have a years gap in between my books, but should have three, and possibly four (the entire series) out in 2016! I love cake too but I don't bake. I'm intimidated and I get easily distracted so I'm always burning things. Last night's dinner for example! Thanks for joining me on the blog today!

Hi Colleen. Cookie cakes sound amazing. I do occasionally bake cookies, my son and I make decorated cookies for holidays. Baked goods are my downfall... I can pass on ice cream, and most candy, but I have a hard time saying know to anything baked!

Now I'm hungry!! I saw on Facebook a Peacock cake - with the tail made of cupcakes! Thought it would be perfect for my daughter's upcoming wedding. I don't think she agreed!

I've never made a fancy cake in my life, but my mother has decorated Christmas and wedding cakes. Works of art.

I'm not much of a baker but I have a Food Network cookbook with lots of beautiful, fun cakes made with fondant and shaped like objects and other food like watermelons, hamburgers and such. I've said I will make one of these cakes one day but haven't yet. I've seen a few nice cakes here and there, but nothing spectacular in real life; only on t.v. shows.

I have a friend who makes really cute cakes for her son's birthday. She's done Thomas the Train and some other really sweet ones. I always feel a little guilty, because I always buy cake or cupcakes for my son's birthday. But my excuse is that we have the yummiest bakery in our town, and we need a reason to eat their cake! :-)

Great blog today! Years ago while I was in Arizona at one of the stores I saw a catus cake 3 layers with green icing it said Happy birthday on it it was pretty. I love the wedding cakes, mine was just a heart shape cake white with peach color roses on it.
Penney