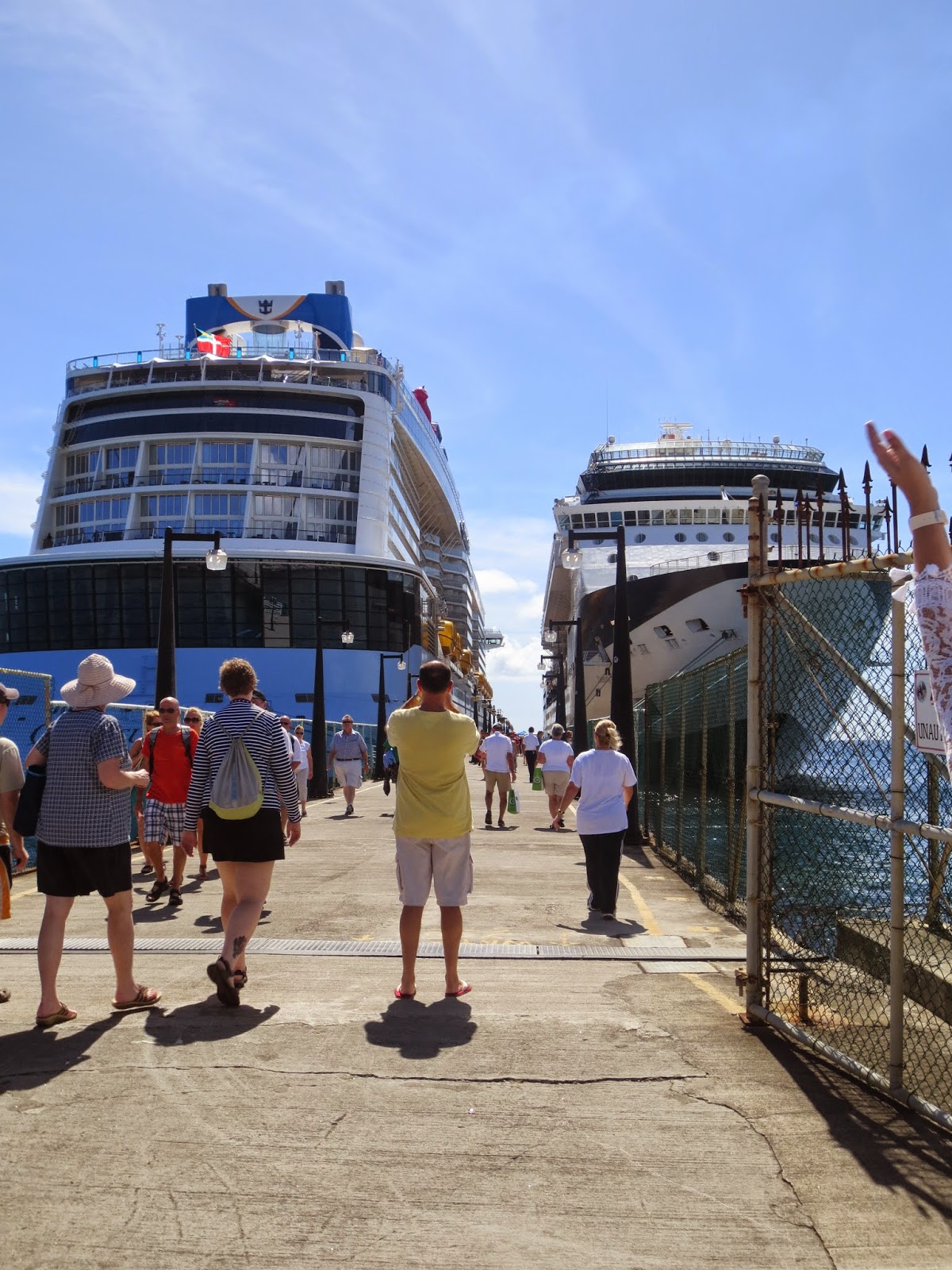 It was lovely to be away from the cold of the Minnesota.  Since my hubby refuses to take cruises and my sister’s hubby couldn’t get away, I went with my sister!  We had a blast docking on a number of islands: St. Croix, St. Kitts, Dominica, Grenada and St. Thomas.

Our goal was to do some of the more adventurous outings while in our ports of call, but on Grenada, they had a Spice Tour.  It sounded fascinating.  And it was.

Grenada is a volcanic rainforest island.  On this hilly fertile soil, they grows nutmeg trees.  Lots and lots of nutmeg trees.  Nutmeg was brought onto the island in the mid-1800s.  Our guide told us that the island produced 40% of the world’s supply of nutmeg, but Wikipedia says it is only 20%.  Still that is a lot of nutmeg.  And it is processed mostly by hand.
Nutmeg trees are 30 to 60 feet tall.  Although the trees were devastated during the last major hurricane.  As we drove the winding mountainous roads, nutmeg trees were planted all over.  Our guide said that they don’t waste anything from the nutmeg tree and I was impressed with their creativity in using every part of the fruit and nut.
The fruit looks like an apricot and is used to make soups and jellies.  The nut is composed of two parts.  The reddish-orange covering is mace.  The nut is the nutmeg.  The mace is stripped off the nutmeg seed and is a more delicate flavor.  Once the nut is dried, the nutmeg husk is removed and used as mulch.

Nutmeg isn’t just used in cooking.  It's also used in cosmetics and pharmaceuticals.  Nutmeg oil/butter can also be used as an industrial lubricant.  Who knew?

The whole process of taking off the fruit, peeling off the mace and sorting through the cracked husks and nuts is manual.  Although in the factory, there was a manually run crusher.  After drying in racks for six months, the nuts are crushed where they were dropped from the drying floor above, to the sorting floor below.
According to our guide, the cooperative that controls the island's nutmeg processing and production has decided not to mechanize the process.  They believed that the currently 80 people, mostly women, at the factory we toured would lose their jobs if mechanization occurred.

The guide also said that Granada’s  unemployment rate was approximately 33%.

I love to grate a little bit of nutmeg into spinach and squash.  And of course it is a key ingredient in pumpkin pie.

What are your favorite recipes that include nutmeg?

My mother always sprinkled nutmeg over a milky pudding she made. The nutmeg was the best part as far as I was concerned. The rest of the family enjoyed the pudding though.

I'm with you Mary. Was it Rice pudding? My mother made that and the nutmeg would be on the top. Now I'm hungry for rice pudding!

We took this tour on a cruise once, too, Nan! LOL--I love your post. We brought home lots of ground spices and used the cinnamon and nutmeg in Christmas baking. I also put it in my winter coffee. Yum!

It was a fun tour - but the poverty in the islands is tough to see. It's hard when their economy is based on tourism and then the ships aren't full - or don't stop for more than a few months in the winter.

I bought all my kids spices packed in some sort of gourd. But I kept the cinnamon sticks! (Bad mom.)

Sprinkle nutmeg on homemade eggnog. Also a key ingredient in gingerbread. Sounds like a fab holiday.

My husband cooks a veal dish with a cream sauce and nutmeg is one of the spices he uses in it. We also use nutmeg in Pumpkin cheesecake, Bananas Foster and other dessert.

India - Thanks for stopping by. Homemade eggnog sounds good right about now! We are sub-zero!!

Kaylee - My mouth is watering. Veal in a cream sauce. Sounds delicious! Of course - dessert sounds good too!