The Waggedy One We Miss The Most 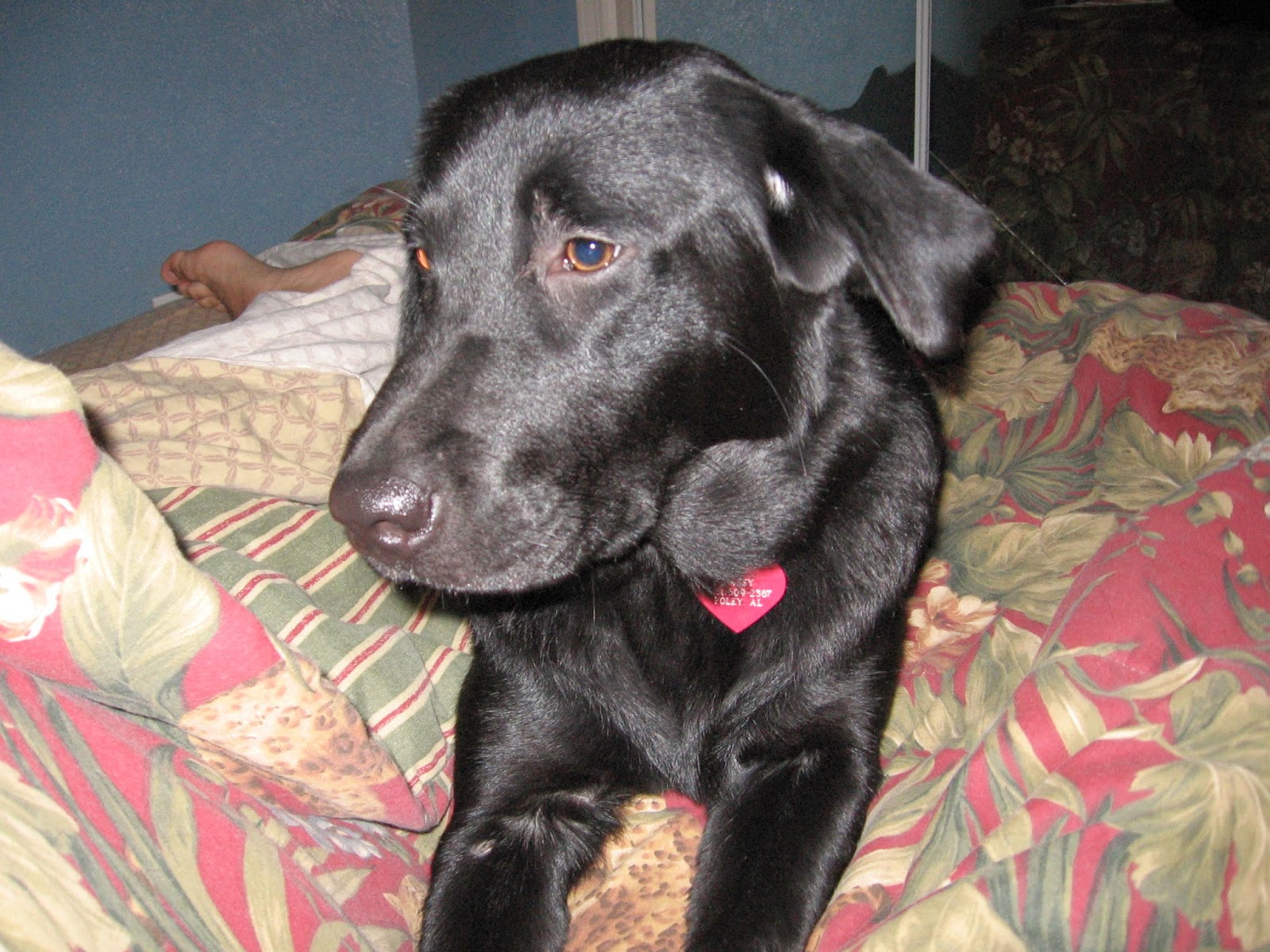 
It was February 2005. My husband and I had recently taken a big step in our relationship and moved in together…or rather, since we were so young at the time (19 and 18, respectively), my parents talked us out of eloping and into living together for twelve months in order to see if our relationship had the legs. He and I knew it did, of course; we had been together for eight months already and had been contemplating marriage for October. However, the “trial run” as my parents called it seemed really important to them so we decided to play by their rules. We didn’t have much. In truth, we had very little. One of the things we did share, and I feel that it has been one of our greatest commonalities through the years, was a deep love of animals. He had a stocky, eight-year-old black Labrador mix named Rocky who was more brother to him than pet. Days after we decided to move in together, he gave me the gift of my first dog: a purebred chocolate lab puppy we named Kahlua.
Owning an animal of any kind was a bit of a departure for me. Raising Kahlua was a trial run of its own kind. I eagerly took on the bulk of her responsibility of her care and training. It was the first time I was solely responsible for the life of another. My husband knew I could do it. The experience, however, didn’t come without challenges. You’ve surely all heard the stories about puppy pitfalls. Shoes chewed to pieces. Mine weren’t simply “chewed to pieces.” A brand new pair of black leather sandals was digested and never seen again. The separation anxiety. Whenever I ventured out to do something simple like visit the post office or go grocery shopping, our house would be trashed by the time I returned. Bed hogging. Kahlua spent the first year of her life sleeping on my pillow with Rocky’s 90-pound bulk stretched vertically across the bed beneath her and me squished between both fur babies and my husband’s chest. It’s a good thing we liked to cuddle…. Within six months, the inevitable happened. Kahlua was pregnant. I was a little shell-shocked. I hadn’t thought my precious puppy was old enough to have babies and had only just managed to acclimate to Kahlua’s insatiable puppy energy. Imagine more puppies. Heavens! My husband admitted to his hopes of breeding the two down the road. Kahlua getting preggers only put his master plan into motion a few years sooner.


I was alone the day Kahlua went into labor, having skipped my college classes that morning to write. I was terrified. Nature has a mysterious way of taking control in such situations. Kahlua went about the whole two-hour interlude with complete grace and confidence. My little puppy metamorphosed into a mother and adult before my eyes. Additionally, I witnessed the miracle of childbirth for the first time. When it was all said and done, there were seven puppies, all round, perfect and healthy. Kahlua struggled to labor the last who was by no means the runt of the litter. It was a girl, a slick mound of black fur that seemed somehow bigger than all the rest. I fell in love with each and every one of Rocky and Kahlua’s babies, but this last one was special….


We went against the rules. My husband and I had agreed to keep one puppy, the black male who looked most like his aging Rocky. We made the mistake of naming and growing attached to all the rest and keeping them longer than the initial two months. Keeping just one puppy became keeping two puppies. Then three. We gave the four others to good homes, including the large seventh one to my future mother-in-law. Through a tragic set of circumstances that happened while my husband and I were honeymooning  in Florida after our wedding in May 2006, Kahlua passed away. We came home to the news and, knowing how much we grieved our baby girl's loss, my mother-in-law kindly returned the seventh puppy to us. Her name was Sassy.


Now Sassy was different in many ways from Kahlua. She was timid and mellow. She rarely disobeyed the rules, despite the antics of her two loping brothers, Duke and Jerry Lee. (The third puppy we initially kept of the seven, Wills, also tragically passed away within the first year of his life.) She loved playtime with my husband and would by no means let her brothers or Rocky push her around. However, when my husband left for work during the day, it was Sassy who curled up at my feet under my desk while I sat down to write. She never moved unless I did. We would sit for hours contentedly in the quiet of our home, her quiet puppy snores and the tap-tap-tap of computer keys the only sounds penetrating the quiet. In finding my husband, I found my soul mate. Loving him and sharing my life with him was all so natural. In truth, and as corny as it may sound, it was like coming home. Alternately, with Sassy, something very similar happened, only my spirit animal found me. In replacing Kahlua and coming to live with us, she came home to the place she was meant to be all along. I loved all of our fur babies, but – like I said – Sassy was special. 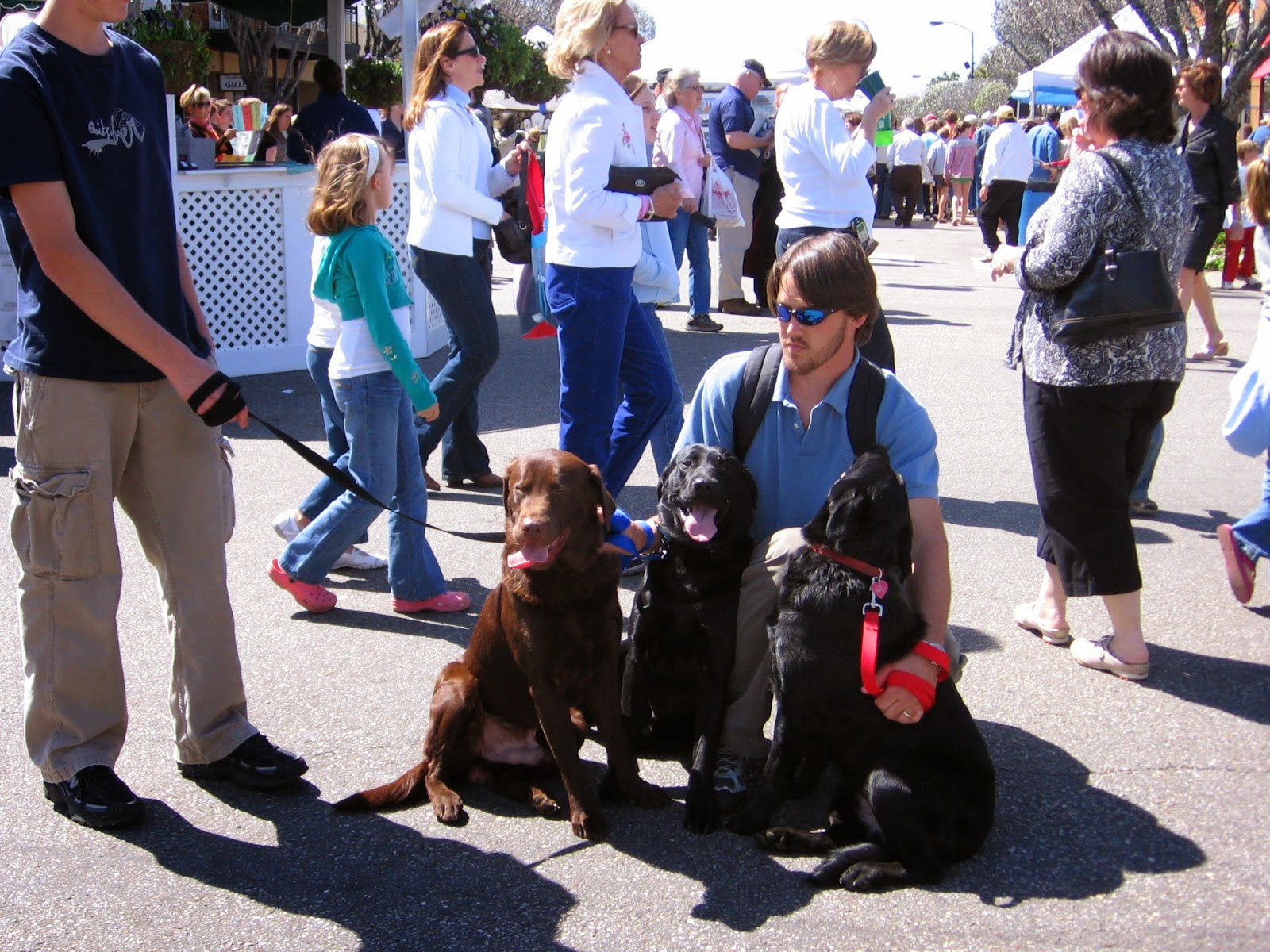 I wept profusely after picking her up from the vet after having her spayed. She was groggy and seemed so small and helpless and I couldn’t help feeling as if I had betrayed her somehow by taking away one of her most basic biological functions. Years later, when I was sick with the flu, my hip was aching terribly as bones tend to while ailing. Somehow knowing this, she curled up against my back and hip, lending me healing warmth until the ache was gone. I wish I had a count of how many hours she laid at my feet in my office, how many books and words I wrote under her restful vigil. I wish we’d had more hours at the park. She loved other dogs and would grow especially playful around other males. Whenever we took her in for her yearly check-up, she would cower behind me and turn her face toward mine if the nurse or doctor came anywhere near her. Shots were a torment. The only way to get her to stop cowering and shaking would be to enfold her in a giant hug. And by giant hug, I mean 90-lb animal. Very large. Very heavy. Yes, all of it sitting in my lap, ear-to-ear, paws around my neck.


Life for all of us changed when my husband and I brought our son home for the first time in 2012. A fur baby he was not. One of my greatest fears beyond his health and wellbeing was that he would have an allergy to pet dander. Sassy was especially curious about this bald puppy to whom I was so deeply attached, but for months I didn’t let even her anywhere near him. She likely thought she was being punished. I was so relieved when it became clear that our little guy was in no way allergic to dogs or pets of any kind. I was even happier when his love of the outdoors began to shine through and we were both able to venture outdoors more. We slowly, carefully introduced him to each of “his doggies.” Sassy was especially cautious around him. She knew how important this non-furry baby was to me. As much as she wanted to be near me, she wasn’t going to take any risks around the little guy. 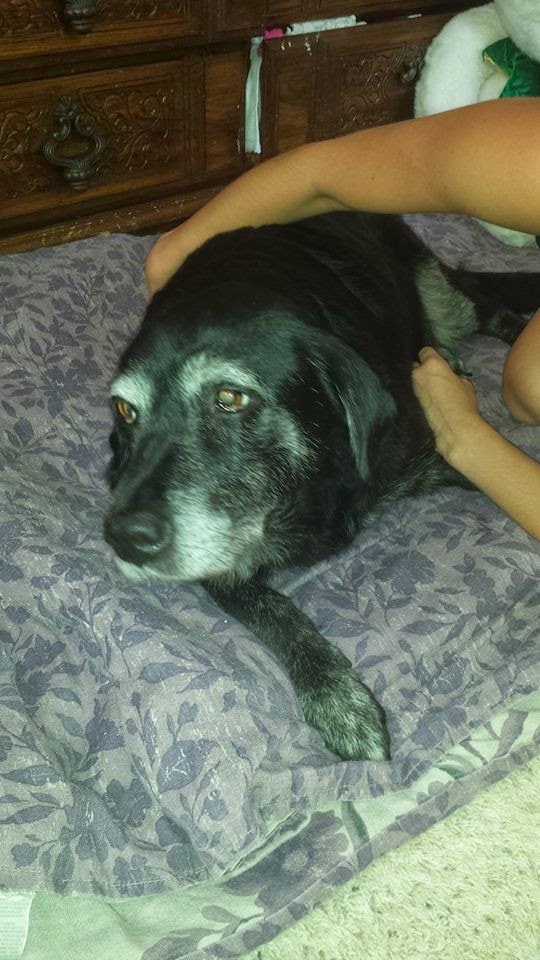 Unfortunately, by the time my son began to cultivate an interest and his own relationship with the doggies, Sassy’s health went into decline. Out of the three, she aged the quickest. By the time she was six, the hair around her mouth and ruff had gone white. At age eight, she began to lose weight rapidly as well as her appetite. She slept more than the others and began to walk with a noticeable limp due to stiff joints. It was hard to come to terms with the fact that she was slowly, physically slipping away. The day came when she looked at me, really looked. The communication barrier between human and canine lifted and through this silent look I was able to hear her little voice inside me. It told me to prepare myself. Days later, it happened. She passed away during the night. While my husband kept watch over our son and the others, I held her and sang to her and talked to her. She’d been there through the ups and downs of everyday life for almost a decade. I owed her this: the close, constant comfort and vigil of her last minutes. Despite the fact that we knew, losing Sassy was a complete and utter heartbreak. My husband buried her early the following morning in the woods. His brothers came out to lend a hand. I received calls and messages from friends and relatives near and far offering heartfelt condolences. Though it could never replace her loss or make us forget, the outpouring of love in the wake of Sassy’s life was a great comfort.


I didn’t know until Sassy passed away the meaning of The Rainbow Bridge. The morning Sassy was laid to rest, my cousin sent me a special Facebook message, accompanied by a poem (below). Recently, when it came time to write the dedication for my third Superromance novel (on shelves July 2015), I couldn’t help but remember this and Sassy’s life and all those hours and words she had helped me write. Many writers are animal lovers and share their lives with fur babies of their own. I’ve heard many speak about their feline and canine friends via social media. I’m sure I’m not the only person, writer or otherwise, who has found her “spirit animal.” But after months of reflection, I feel it’s finally time to try to memorialize mine in the best way I know how: by sitting down at my desk for a few hours with the tap-tap-tap of computer keys, missing the little snores and snorts and that companionable warmth at my feet. 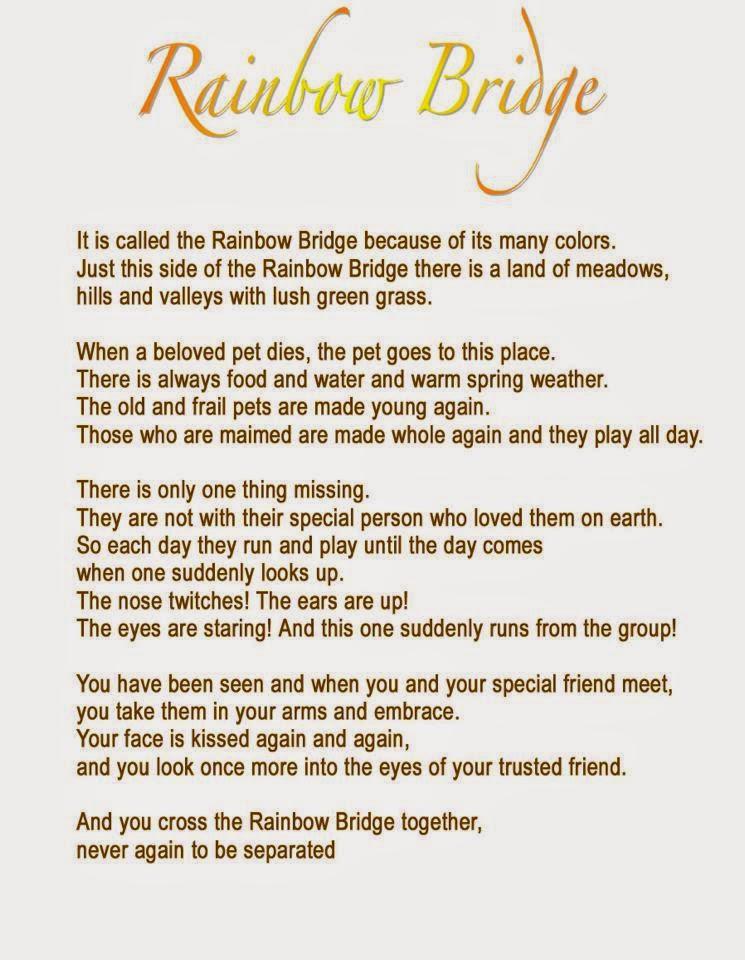 In 2008, when my husband and I moved into our first house, I did a vidblog about my new office space. Sassy decided to be adorable and crash it. Here's a glimpse of her waggedy tail and playful, kind nature, as we remember her!


Thank you, my dear friend, for nine wonderful years. We'll meet you at the Rainbow Bridge....
Posted by Amber Leigh Williams at 6:00 AM

What a beautiful story. You made me cry too. Pets bring us happiness and joy and memories to last a lifetime.

Amber ~ Losing a pet is so hard but the joy they bring us while alive and the wonderful memories are worth the sorrow.

Tammy, thank you for commenting! You're right about memories. I love the memories of Sassy and other pets we've lost through the years.

Kaelee, the joy definitely outweighed the sorrow. Thanks for commenting!

I loved this. Such a sweet Sassy girl. I have two labs (one is a puppy - 10 weeks) and Sassy looks a lot like my Georgia. And the rainbow bridge thing killed me.