HIS KIND OF PERFECTION 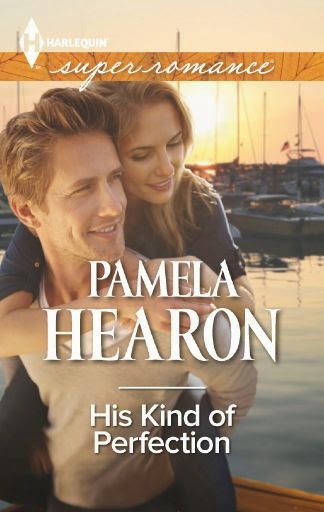 Sometimes I have to pinch myself to make sure this is still a reality. It seems like just yesterday I received the call from my agent that Harlequin Super Romance wanted to buy my book when in real time it occurred three years ago.

That book (Out of the Depths--August 2012) was followed by two more, The Summer Place (April 2013) and Moonlight in Paris (February 2014). At that point, I signed a four-book contract, and the dream I was living became an actual second career. So it's with much pride that I present my 4th Harlequin Super Romance--His Kind of Perfection.

I love writing for the Super Romance line because it gives me a chance to make up stories about characters who could be my neighbors. Yeah, I know how wildly popular the billionaires and the sheikhs are in the romance genre. And when I'm looking for pure fantasy, I have no problem settling in with one of those guys. But the stories that truly steal my heart are the ones that convince me that hunky hero is just an ordinary guy who makes the world a better place, not with his money, but with his heart.

Enter my latest hero--boat mechanic Kale Barlow. Mmmm-mmm. I think Kale is one of the hottest heroes I've ever written, and I love him to pieces. He's just so ... so real. Despite how thin the model on my book cover looks, my hero Kale is overweight. In fact, at the beginning of the book, his girlfriend breaks up with him because he's gained so much weight, she isn't attracted to him anymore. In an effort to win her back, Kale joins a gym and enlists the help of a personal trainer, who just so happens to be the heroine, Bree Rice. In her work, Bree has been surrounded by buff guys with drool-worthy physiques, and yet it's Kale who wins her heart with his engaging personality.

I'll admit, I wasn't sure this concept would fly. I'd never read a book with an overweight hero, and my husband keeps telling me to remind people that "the fat hero" isn't based on him. :-) But the RT reviewer set my mind at ease when she wrote that Kale's weight didn't make him seem unattractive in the least.
Precisely the Kale I was going for.

To me, Kale's the boy-next-door. The one who really is out there, waiting to be noticed and appreciated and loved for the kind, gentle, and honorable way he faces life every day. He's not perfect ... but he's as close as most of us are ever going to get.

His kind of perfection is perfect for me.

Posted by Pamela Hearon at 6:00 AM

Congratulations on your new book! It is such an original idea and I'm adding it to my TBR pile! Well done!