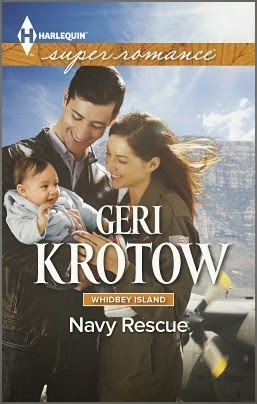 Geri Krotow and I both served in the Navy.  We both married Navy men.  And we both write romance from our Navy backgrounds.

This month Geri's book--Navy Rescue--and mine--The SEAL's Special Mission--are out together.  We thought it would be kind of fun to interview each other about our Navy experiences.

Today I'll be interviewing Geri and Friday she'll be interviewing me.  Hopefully, you'll learn something about us that you didn't know before.  I can tell you Geri was an officer and I was enlisted and we both had very different and unique experiences in the Navy.

Gwen Brett, the heroine in Navy Rescue is a P3 pilot, shot down during a disastrous mission.  Gwen manages to survive and rescue a baby.  She returns home after six months to the care of her ex-husband.  I wanted to find out how Geri's experiences compared to her heroine's.

Rogenna: Why did you join the service?

Geri: I always wanted to serve my country. I’ve had a fascination with the Revolutionary War since I was very young. I thought about enlisting but in 10th grade a classmate did a speech in English class (remember those?) on the service academies and once I heard about the Naval Academy, I was hooked.

Rogenna: Why did you leave?

Geri: Many factors. As Intelligence, I saw the best and worst of people and situations. I saw a senior Intel Officer taking disrespectful behavior from an “operator,” a Surface Warfare Officer, yet they were both the same rank. I thought I deserved better than to dedicate several decades to my service only to be treated so rudely by the forces I support. Also, the writing was calling by then—I knew it was time to make a change. Resigning my commission gave me the opportunity to stay home to raise our kids as my husband was regularly deployed, and give them the stable environment they needed. It allowed me to start writing daily.

Rogenna: Why do you write romance?

Geri: The HEA, Happily Ever After, is as much a part of my author’s voice as is the suspense. I am a huge fan of genre fiction and romance is the number one genre! I’m also quick to educate any one who makes a comment to me contrary to this—you know, the “why aren’t you writing ‘real’ books?”

Rogenna: What was your "job" (position, rank) in the service?  Have you ever flown (or flown in) a P-3C or gone through survival training like your heroine?

Geri: Yes, I flew in a P-3C Orion—many times, many missions. I was the first woman on the East Coast to earn Aviation Observer Wings. I planned to go to SERE (Survival Evasion Resistance and Escape training) as it had just opened up to women in the late 1980s (maybe sooner but that’s when our squadron/wing made it available). My husband came back from his SERE and said “I love you and you know I support you in all you do in the Navy, but I don’t want you going through this if it’s not absolutely necessary.” I was due to leave my operational tour in a few months, so I opted to not push it, and didn’t end up going.
I’ve seen Russian planes, submarines, and other vessels from a P-3C, and I’ve worked alongside many of our most trained specialists in all fields.
I got out as a Lieutenant Commander (O-4), the equivalent of an Army Major. I’d been promoted a year early but never received the pay—I didn’t stay in long enough to get it.

Rogenna: 1976 being the first year women were accepted into the military academies, you attended the Naval Academy in what year?  Do you consider yourself a pioneer?

Geri: The first class of women graduated in 1980 from the service academies. I went in 1982, and graduated in 1986. Am I (and my classmates) a pioneer? Hell, yes! I wish I could say it was easier for my class or the classes ten years after me, but all you need do is read the national news—women are still struggling more than they need to at the Academy. It’s unacceptable and I wrote an op-ed to the Washington Post last year (that was never published) about it. I’m a big supporter of having agencies outside of the chain-of-command to investigate and adjudicate sexual assault and harassment crimes (against both sexes). My husband was the commanding officer of a squadron and we disagree on this. I understand that discipline in ranks requires complete trust in authority, but I can tell you first hand that whether it’s at the Academy or in a military unit, it’s all too easy for those in command to pay lip service to protecting their troops while not pursuing justice as needed.

Thank you Geri for a great interview.  I'm giving away the one digital copy of the May 2014 Bundle 2 of 2 which includes both mine and Geri's books, along with another great Superromance by Mary Sullivan. 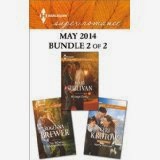 What a fascinating post thank you. You were practically a pioneer. So much you can take & use in your writing.

Morning all, I'll be checking in throughout the day and I"m sure Geri will stop by, too.

Morning, Mary. I agree Geri was a pioneer :)

You know, Mary, I always loved Laura Ingalls Wilder…maybe that's when the idea of being a pioneer started. :) I wasn't alone, however--I have many wonderful Academy classmates who made it through with me. It takes a team!

Ro was a pioneer, too, and we'll find out more on Friday when I get to interview her!

Very interesting. Refreshing to read a firsthand account of women in the military that isn't sugar-coated, too. As a veteran myself, people will say, "You don't think it's really as bad as these stories in the news, do you?" I'll say, "Oh, they sound quite possible to me." People are stunned when I say that. That doesn't mean I'm not patriotic or proud of the military, but everyone in uniform doesn't wear a halo, either.

What a wonderful interview. Lovd it. Happy early Memorial Day too

So true, Caro. I was telling Geri my interview ran to 15 pages because I'd keep going off on tangents and had to cut, cut, cut :)

But I met a lot of wonderful boys/men and learned to write good men from them.

Hi Tammy! It was a fun interview. I'm glad we did this because I learned some stuff that I didn't know about Geri.

What a wonderful post.. I enjoyed reading the Q&A. It was great to learn about Geri!

Just wait until you hear some of Ro's answers on Friday! Thanks, Tammy and Colleen. I'm excited to learn more about my writing-sister-navy-vet friend, too.

Wonderful interview. I am looking forward to Rogenna's interview.

This was a great idea, ladies! I can't wait to read Friday's interview.

Great interview with Geri, Rogenna. I'll check back in tomorrow for yours!

Geri, I loved hearing about your experiences. Yes, you certainly were a pioneer!

Thanks for stopping in, Jennifer Kaelee and Mary. We're all a big Super Romance family, writers and readers, and yet there's always more to learn about each other. Ro has given me so much to work with that I'm struggling to figure out what to keep-they're all wonderful! Maybe it'll have to be a two-parter blog, lol.