I spent much of Mother's Day pulling weeds in my front garden. I know - doesn't that sound like fun? And honestly, it's not something I would ever imagine doing. Until this year, I stayed as far from our gardens as possible. I hate the feel of dirt on my hands, hate gardening gloves even more, and really don't like all the crouching and bending  and stretching. Most of all I hate the thought of what might be lurking beneath the dead leaves. I am well aware that the outdoors belongs to many of God's creatures, and I have no more right to our patch of dirt than the mice and snakes and bees that also live there. But that doesn't keep me from looking at the garden and thinking that all God's critters are setting up a schedule to determine who is going to jump out at me when. Either that or they're pooling their money to hire a grizzly to take me out.

But the garden was a mess, and this year I girded my ample loins and waded in. After a while I decided it wasn't so bad. Usually I can only fit in  few stolen minutes before the morning walk/jog, but on Mother's Day I had hours to spend in the gorgeous sunshine while the kids played all around me, feeling the immense satisfaction that comes with yanking on a weed and pulling up a root that's longer than my intestinal tract.

As I crouched and hummed and yanked, I noticed one little bird hopping around me. She was small, grey'ish blue, and seemed more comfortable on the ground than in the air. She popped from the roses to the forsythia to the weeping cherry, coming close to me but never intruding on my space. I talked to her. She didn't talk back, but I hoped she could sense what I meant when I assured her I wasn't going to harm her.

Then, as I stretched to remove a dandelion from near the rosebush, something caught my eye. Something pink. Something MOVING.

My first thought was that it was a mouse. Specifically, a Wild Killer Mouse, a cousin of the rabbit in Monty Python and the Holy Grail, waiting for the perfect moment to leap up and devour my face. (Sometimes, having a writer's imagination sucks.) As I prepared to run for my life I got a better look. And what did I spy with my terror-filled eye? 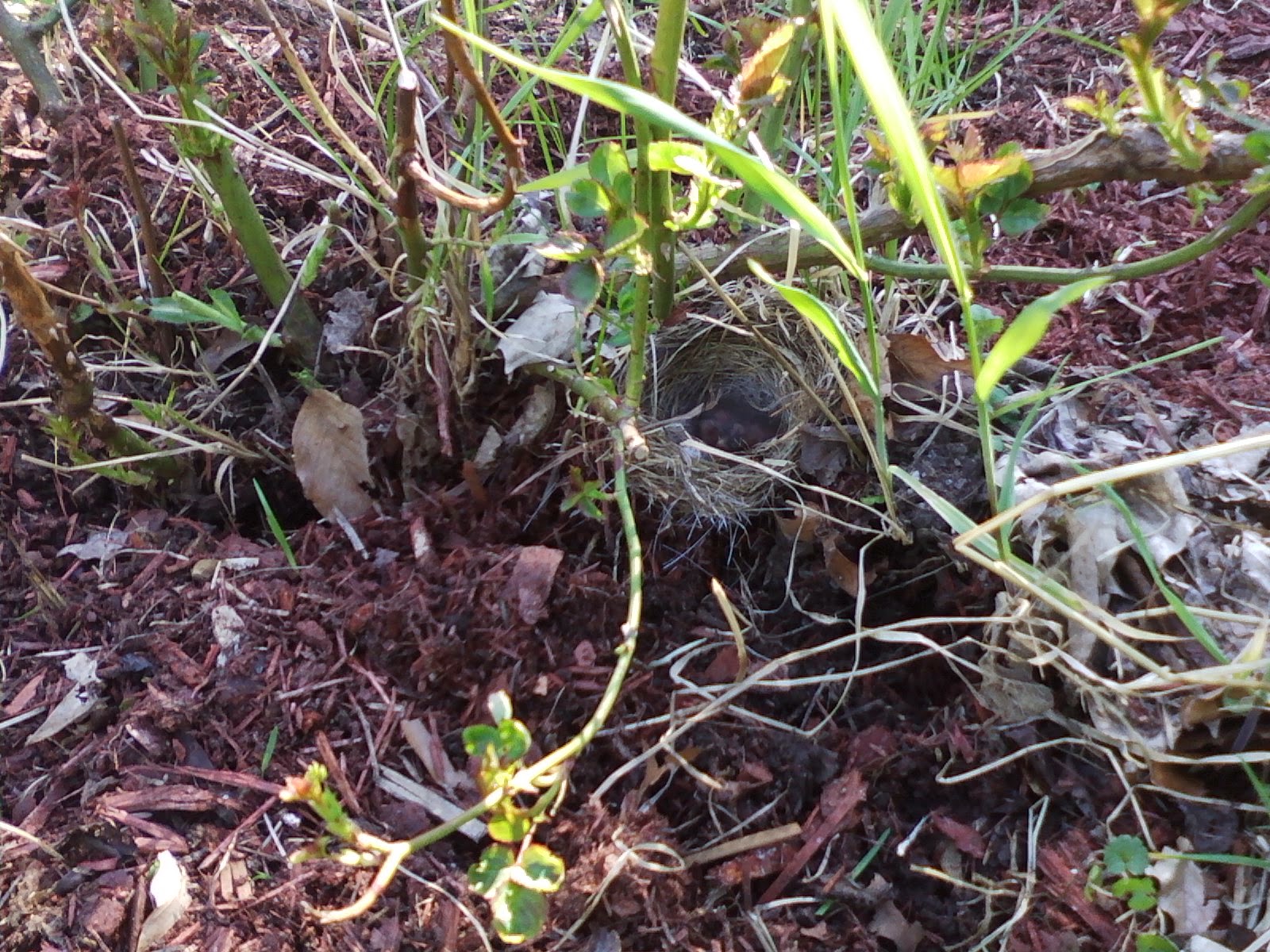 Can you see it? There's a nest there, tucked beneath the branches of the rose bush. And in that nest there's some gray and pink fluff with a dot of yellow. Babies. Three baby birds, so tiny and new that when they stretch those scrawny little necks up and open those yellow beaks in search of food, they don't make a sound.

All of a sudden, that hopping bird made sense to me.

I backed away and worked extra carefully for the rest of the day. The mama wouldn't return to the nest when we were too close so I moved my work to another end of the garden (trust me, there were plenty of weeds in need of dispatching) and watched from afar. And thought of how I'd been so busy bracing for something unpleasant that I almost missed the amazing gift of this nest, these birds, this glimpse into a new world.

And then I thought - you know, our stories are often like that. Our characters are muddling along, living their lives and usually doing a fair job of it - or at least that's what they tell themselves - until something happens to throw their world upside down. Things are a mess. They anticipate all kinds of complication and trouble and weeds. (Also, possibly grizzlies.)

But while they're fixating on the trouble that's befallen them, something else happens. Love happens. They aren't expecting it, aren't looking for it, and sometimes it's the last thing they want. But there it is. New and fluffy and almost silent, but oh so real. Oh so precious. Oh so alive.

There are people who think that all romance novels are about nothing more than a girl catching a guy, or any variation thereof. Those folks are wrong. Romance novels are about people trying to uproot the weeds that have taken over their life, only to stumble into love in the process. The love isn't the goal. It's the bonus, the reward for the struggles, the precious discovery they never expected but which ends up being the new focus of their lives.

Just like that tiny nest and those even-tinier babies are now the focus of my messy but immeasurably amazing garden.


Now tell me, readers - how do YOU feel about gardening? How about surprises?

Darn, you have an amazing way with words. You should be a writer. And I garden as little as possible. ;) But I do take the occasional weed.

I think that might have sounded bad, since I meant "take out" the occasional weed... :0

So glad no wild killer mouse attacked you. What a wonderful analogy, and if I gardened (I have fantasies) I want basil, cilantro, leaf lettuce, and maybe a potted tomato for my husband.

Emma, you wild thing, we know what you meant!!!

MJ, basil and cilantro - and tomatoes, too - work well in a little container garden. One nice fat pot. Would that be a decent compromise?

Oh how wonderful! I have not gardened in a few years... do not care for dirt under my nails, but I have enjoyed seeing the little baby quail running around after their parents and seeing a momma feral cat have two kittens behind our garage... they are so cute.

Colleen, I hear you on the dirt under the nails (and the scratches, and the nicks in the nails). The quail and the cat sound adorable!

When I retire...it that every happens, maybe I'll have some time to garden, meanwhile, my husband is the horticulturalist and used to grow soybeans, string beans, lettuce, cabbage, corn and all sorts of other vegetables. For the last 8 or 9 yrs he's been to busy and I miss the fresh vegetables! I loved this blog. It just reminds me of all the things we take for granted and all the things that hold us back from seeing and doing what we would like to do! Mahalo for opening my eyes this morning Kris!

Oh, Snookie, thank you so much. I love hearing that my words resonated with you!

And yes, you definitely need to be gardening again. You have earned that deliciousness!

Kris that must have been so thrilling to see. I hope the babies survive life on the ground.

I love gardening and I'm always grateful when my perennials come up in the spring. I mourn the one's that don't make it. I have dirt on my hands and my feet and my knees . I'm a messy gardener. However, fresh tomatoes, herbs and other vegetables are so much fun to grow and eat.

Kaelee, I'm crossing every possible appendage for those babies. And is there any way to garden that doesn't lead to being caked in dirt?

I would have loved to see the babies. We have nest boxes in the apple trees for chickadees. When there are babies they comb the trees for bugs to feed the babies which keeps our trees healthy.

Linda, what a great win-win-win circle you have going there!

I love gardening but not the surprises I found one yesterday morning in my kitchen on a wire rack I have there for pots and pans.
I went to put a big pan on it and something moved I thought oh **** a mouse then I heard a hiss and then I saw it very long body coming over a box, a long California king snake lucky I know snakes and handle them I caught it as it tried to bite my hand, it's a beautiful snake about 4 foot. it must have came through the patio door as I had it open since it's been so hot here. We still have it here in a big cage it's someone's pet I can hold it it doesn't bite We live in a apartment and I ask our manager if he knew anyone here that has snakes he told me to ask the guy upstairs on the 2nd floor so I did that guy told me No I have only rattle snakes 5 and they don't get out! I sure hope not! Yak! Our 2 girls ages 18 and 19 years have name it "Bonnie" so until the owners come and get it we'll keep it for now.
Penney