I Still Believe In Santa... 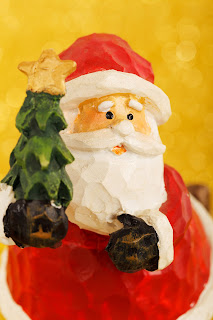 My boys are all grown now, but every year Santa still leaves them at least one present under our tree.  I tried to stop this tradition many times, except I couldn't because we have a very special elf in our house.

His name is Ty.  He's twenty-six years old--old enough to know better--you'd think, but maybe not.  My Ty has Down's Syndrome and he still believes in Santa.  I've tried telling him that Mom is Santa in this house.

I've even gotten philosophical in trying to teach him that Everyone is Santa--that he can be Santa--that Santa is simply the spirit of giving.  But I'm not sure he's buying it.

The latest WWE game for his game system and a WWE calendar are at the top of his list every year.  Usually, a movie and a music cd.  Last year he specifically wanted Jersey Shore Season V--kind of cute in a horrific way--I couldn't see throwing money at Snookie so to date that is the only item on his list Santa never delivered.  Every year it's new pjs, undies and socks.  A toothbrush, toothpaste and an assorted mix of goodies in his stocking.

I was talking this over with my mom the other day and she mentioned thinking I was going to be one of those kids who believed in Santa forever.  In fact my younger brother was far more skeptical by age four than I was at ten.  Which is why my mom decided she had to come up with a clever way to break the news about Santa Claus.  All I remember is the scolding.

My mom pulled me aside to scold me for telling my little brother there was no such thing as Santa Clause.  Only I'd never said anything to my brother because I still believed in Santa.  She ended by asking me to be her little helper in keeping the secret for few more years until my brother was old enough to understand. I still can't decide if this was clever or cruel on her part.

By the time I was sixteen I had another little brother so Santa continued to visit our house every year.
Most kids stop believing in Santa by the time they're eight.  That's the age when reasoning skills start to kick in.  So when I left home at eighteen it was well past time I stopped believing in Santa Clause.  I'd hate to think I was short on reasoning.

In the Navy, far from home, the spirit of Santa still lingered.  Christmas Eve and Christmas day were busy days in the Chaplain's Offices and Chapels.  But I'd still take time to put together care packages and play secret Santa to whoever got stuck on duty around base, especially the gate guards.

I married a man who didn't believe in Santa--probably because he only got socks and underwear for Christmas--but he went along on my wild sleigh ride anyway.  Santa's name may be said with a wink at our house these days, but even as the boys got older I never confirmed or denied his existence. We all just took our cue from Ty.

While I no longer bother to hide presents--the boys found all my best hiding places around the house years ago--and don't have to stay up late Christmas Eve tinkering and wrapping, Santa still visits our house because we believe.

How about you?  Do you believe in Santa?


Use the promotional code below to pick up your FREE COPY of One Star-Spangled Night in the format of your choice from smashwords.com .

My 2 babies girls are now 18 and 19 years old and I still leave something out from Santa even though they know it's me and Dad I enjoy it and so do they.
We love this time of year
Penney

With my family, we still get presents from Santa... Last year my older nephew was trying to tell the little one that there was no Santa and we told him to stop. For everyone in our family, Santa is there to spread some cheer.
Happy Holidays!

You're right, Mary. There are always young children. So there will always be a Santa Claus.

I'm with you. Love this time of year! And big kids need Santa, too. Mine sure do.

Are you still living in my neck of the woods? Maybe we should look out our windows and wave happy holidays to each other :)

I remember very well when I found out. An older (8, maybe?) neighbor girl told me, and at 5, I was both crushed and outraged.

I was a suspicious child. I caught my parents playing Santa Claus, which just reinforced my own doubt. But it nice nice to let go and believe in something that's just fun and warm and giving.

As long as someone believes in Santa ~ there is a Santa.

I think it's sweet that your son believes ;-)

My older son is on the autism spectrum and is minimally verbal at almost 5 and I don't know what he thinks of Santa or if he thinks much of him at all. We try to do it w/out making too big a deal out of it. I know he likes Christmas b/c he likes to get out his Christmas books and point at all the pictures of presents and candy ;-) He also loves the Madagascar Christmas Special that has Santa in it.

And we have a younger one who is almost two, so of course, we'll do Santa for a few more years no matter what.

I have a friend who says they are going to tell their son (less than a year old right now) that Santa is just an imagination game like dress up at Halloween. Not for any kind of religious reasons, they're just not into Santa, I guess.

I have two thoughts 1) Try explaining the difference between make believe and reality to a small child and see how far you get and 2) Just don't let your kid be the one to ruin it for someone else's kid that believes!

LOL, nope I have not moved. *waving* HAPPY HOLIDAYS Rogenna! :)

Santa comes to my house every year. He makes another stop at dd's and a personal appearance to check his list on Christmas eve. come see for yourself.
Merry Christmas Everyone,