Question of the Month - The Costume Edition

With Halloween fast approaching, we asked the Superromance authors to tell us about a time they dressed in costume and why it stands out in their memory.

Anna Sugden: We didn’t celebrate Halloween in the UK when I was little; the focus was on Guy Fawkes Night (or Bonfire Night) on Nov 5th. When we moved to the States, I did go trick or treating in the couple of years before I went to boarding school, but I honestly can’t remember what I went as! I can’t find any pics to help out either. What I do remember is the street looked lovely lined with those paper bags filled with candles and my first taste of sweeties like candy corn.

Pamela Hearon: Back in the late 80's, our family went to a Halloween Party dressed as the California Raisins.  I got four large, black garbage bags and made faces on them using felt and Styrofoam bowls for the eyes and large, red felt lips.  We wore dark pants and dark long-sleeve shirts underneath, sneakers, and my husband's work gloves.  When we arrived, we got in a line with my husband in the lead.  He had a boombox on his shoulder playing "I Heard It Through the Grapevine" and we danced our way into the party.

Mary Brady:  This one's easy. I went as Brigitte Bardot. Let me do "why it stands out" in my memory first. Well, I had very few of Ms. Bardot's (perceived at the time to be) assets. What I wore... A blonde wig, eight (let me repeat 8) pairs of panty hose stuffed into my tiny little bra and smoothed to fit under a short, tight yellow dress. To make my legs longer I also wore teeter-inducing platform sandals. For those luscious lips, I used a tube of Arrest Me Red lipstick. To give you a time frame I also wore panty hose and here is Brigitte now and then.

Vicki Essex: The year I got married, I decided to don my wedding dress, a handcuff necklace and hot pink patent leather Doc Martin boots. With mussed up hair and raccoon eye eye makeup, I was dressed as the incarnation of Commitment. Really, it was just an excuse to wear my wedding dress again.

Lenora Worth: One Halloween, I went as a palm tree complete with a coconut bra (but I was wearing a tank top underneath) and palm fronds all around my head like a crown. My husband went as  beach bum who had his own private palm tree to follow him around. Every time he'd sit down, I sat behind him and pretended I was a tree. :) I also went as a giant spider one year. Made my legs and back out of trash bags stuffed with paper.

Joan Kilby: Years ago when I was at university I dressed up as Pippi Longstockings. I had long hair then and I straightened and bent a coat hanger over my head and threaded it through my long braids so they stuck straight out and curved up. From a second-hand clothing shop I found a dress with a short full skirt and puffy sleeves. I bought long, over the knee stockings of red and white stripes. I had a ball at a costume party even though no one could get too close for fear of getting their eyes poked out by my stiff braids. 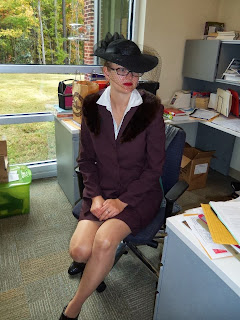 Jennifer Lohmann: At the library, we can dress up for Halloween, but we are supposed to be something from the library collection (character in a book or movie, for example, rather than something clever like these. I had the great idea of dressing up at Brigid O'Shaughnessy from The Maltese Falcon.  You can see in the picture what I wore (and I think I was pretty spot on for the costume). However, this costume sticks out in my memory because only ONE PERSON knew who I was (I gave clues and had a picture of Brigid sitting on the reference desk). When I told people the name of the character I had dressed up as, one more person figured out who I was.
It was a costume fail.

My other costume fail was an attempt to be clever. Again, I was dressing up for work (before the library-collection restriction). I was going to be a cotton swab. I had a fitted light blue sweatsuit (top and bottom) and put cotton around my feet, plus constructed a cotton/Styrofoam hat.

This costume fail sticks in my memory because it was ridiculous. And no, I don't have pictures.

Laura Drake: My husband and I had been married a couple of years when we joined a motorcycle club (think old farts, not Hell's Angels.) Our first meeting was a Halloween dress-up party.

He went as a mouse - I went as a punk rocker. Raided my daughters closet for the clothes, sprayed my hair red (as in carmine,) hung upside down on a swing set while my neighbor put hard set gel in my hair and waited for it to 'freeze' - instant Mohawk.

With goth makeup and a choke chain dog collar (the neighbor's dog lent it to me) and a chain from my earring to an ear cuff in my nose . . .  Man I looked bad. We didn't ride the motorcycle to the party (would have ruined my hair.)

I walked into that party and those poor people didn't know what to think!
Once they got to know me a year or so, they told me I freaked them out...they didn't know WHAT they'd let into the club!

Geri Krotow: My favorite go-to is a spin-off of Carol Burnett's mop/cleaning lady. But I have curlers in my hair, a unibrow, a cigarette hanging out of my mouth, knee-hi stockings with mule slippers, and lots of extra padding. I've also worn a stretch leopard one-piece but um, those days are behind me, I daresay. Don't want to REALLY scare anyone!

This year my daughter and I bought Katy Perry false eyelashes which I'll wear to hand out candy. Sad thing is that the kids probably won't notice...it's the style right now.

Mary Sullivan:  When I was still in my twenties, I tried on my old Brownie uniform from when I was a child. I managed to squeeze into it, but the sleeves only came to my elbows and the dress to the tops of my thighs. So I wore sheer black stockings and purple backless high heels, curled my hair with a ton of rollers and wore a lot of makeup. I went to the Halloween party as a Brownie Tart!

Kris Fletcher:  In my second year of university, my housemates and I held a Halloween party. I grabbed a bedsheet and some ribbon, pulled my hair up, and became Athena, the goddess of wisdom. So who ended up talking to me all night? A guy dressed in a box that said  Greasy Old Vaseline. Satisfaction Guaranteed or Your Night Is Wasted.

And as the saying goes, Reader -  I married him.

And now, Readers, it's your turn. Share your costume stories with us!
Posted by kris at 5:30 AM

Email ThisBlogThis!Share to TwitterShare to FacebookShare to Pinterest
Labels: costumes, Halloween, Question of the Month

My best costume idea was actually worn by my husband. One year, at the last minute, I dressed him as my son's bedroom floor. He wore a gray sweat-suit, and we pinned Legos, hot wheels, some candy wrappers and a pair of Thomas the Train size 4 tighty whiteies. Basically just random stuff we actually found on the floor of my son's room.

My husband and I went as Raggedy Ann and Andy to a costume party one year. I made our wigs out of bright red wool and shower caps. Our costumes were old clothes that I hand sewed a ton of patches on. Old sneakers also got patches sewed onto them. We didn't look like the dolls but we did win a prize. My husband reused his costume quite a few years later and he won a prize again.

We actually don't celebrate Halloween here in Australia, so no costumes. I think I would make a great witch though.

Kristina, that one sounds perfect.

Kaelee, oooh, you are one dedicated costumer!!!

Mary, I knew about the no-Halloween in Australia thing, but do people ever have just plain costume parties? I always wondered about that.

Kristina, that is a hilarious costume!

I've never been to a costume party as an adult. How sad. I did enjoy dressing up in elementary school. Now kids here don't even get to wear costumes to school. too sad.

What a fun post, Kris, thanks for doing this! Kaelee I love Raggedy Ann! Your husband is a good guy. I've only ever been able to get mine to be Indiana Jones.

Geri, if my hubby were to want to dress up as Indiana Jones, I don;t think I would ever let him change out of the outfit!

when my husband and I lived in England I loved Guy Fawkes night it was the best!
Here in the states when I was a kid I always dressed up as princess my gowns always had to be pink! When my 2 girls were little it was always Barbie! Now my youngest will dress up and pass out the candy the other one won't. It's still a fun time!
Penney