This is the view of the plot of dirt outside my back door.  Let me start by saying the City Girls Guide to Gardening is not a how to, but rather a how not to guide for gardening.

If you remember last year around this time I wrote a post called Another Sixty Dollar Tomato after spending three times that much to put in a garden.

Those pictures I posted were pretty.  Nothing that started from seed came up.  We did, however, harvest several tomatoes.

This year my husband reclaimed his spot down the hill for his "someday" shed.  He hasn't started building it, yet.  But he moved my garden up the hill and bought a truck load of dirt.  I layered in some shredded manuscript pages and was good to go.

So far this garden has cost me nothing.  I think my husband spent $35 for the top soil, but used it in several of our flower beds.  I can grow flowers.  Just not vegetables.  Except this year things are looking up.  I had 20 or so packets of seed left over from last year.

I didn't expect anything to sprout.  The seeds were a year older and nothing I planted last year took hold.  But I went on line and learned that soaking or scratching the seeds sometimes works.  So I soaked all my seeds overnight.  I didn't even attempt to start the seedlings in the house.  I planted straight to the ground.  In a rather haphazard fashion that left my Country Boy husband scratching his head. 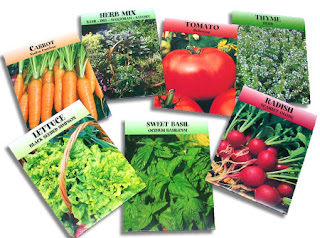 I planted 1 each pumpkin, cucumber, cantaloupe and watermelon in the corners.  You're supposed to plant them in mounds according to my better hald.  If I was planting according to the directions I'd have six heads of broccoli and nothing else.  Do you know they have to be 18" apart in all directions?  My garden is only 4'x6'.  I figure the vines can spill over the side where there's plenty of room to spread out.  You can't tell by this picture, but they've all sprouted beautifully.

I have 4 stalks of corn, 2 snow peas, 3 rows of broccoli which I should have thinned when they were sprouts, a row of carrots, lettuce, onion and 2 pepper plants, 1 chili and 1 bell.  The only thing that hasn't come up yet are the 2 green beans.

Maybe the secret was \keeping the tomatoes out.

I now face the daunting task of having to thin out plants eager to grow all because I had rather low expectations.  I'll try to get a close up tomorrow so you don't think I'm crazy.  There really are plants in the picture.

Please don't forget to enter our super six-pack contest and then hop on over to my site www.rogennabrewer.com where I'm giving away a $25 amazon.com gift card.
Posted by Rogenna Brewer at 5:00 AM

I can grow basil and mint. So far the deer haven't eaten them, but I do sometimes find bugs in my salad spinner.

I think I'll have apricots this summer, too. It seems to be an every other year kind of thing.

I just finished your novella, One Night In Reno. I loved it, but was sorry it was only a novella. I could have kept reading, even though the bath had gone cold.

I have no luck with growing vegetables. I've tried seeds and seedlings. I think the birds get to my plants. My Mother can grow anything & everything.

We have rabbits to worry about so my husband bought some chicken wire. I'm trying to convince him to make something I can open and close, instead of having to work over it.

Thank you for the lovely compliment on Garrett's and Jenny's story. Yes, they were wonderful characters to work with and deserved a bigger book. Short story writing is hard :)

My mother-in-law is like that. Just her strawberry patch is twice the size of my little garden.

My own mother moved into an apartment with a shared garden so she's having fun this year as well.

I'm a flower gardener, and I have herbs. My forays unto vegetable gardening have never worked out very well. We put out ten heirloom tomato plants last year and harvested only four tomatoes. Not enough sun in our very shady yard. One time years ago, I planted six hills of yellow squash. I had enough to eat, freeze, share with friends, and still feed a small army :-)

Your tomato story sounds like my $60 tomato. I balk at the high prices in the supermarket, yet think nothing of investing $15-$20 in a plant that usually dies or gives me a couple small tomatoes :)

Last year I planted Zucchini, which is supposed be easy to grow and never did. I'm trying cucumbers this year. Maybe I should give yellow squash a go.

I definitely have a new appreciation for farmers.

Wishing you the best of the best of luck with your garden! I got started so late this year, I planted mostly plants and very few seeds. Right now it looks great. Of course, the plants have only been in the ground for 5 days. Fingers crossed for all of us who planted.

My youngest daughter and I plant flower seeds all the time she loves to see them grow. We have a small patio porch I have some pots there with flowers. I would grow veggies but they get pick by people around here so we hardly don't get any. They never take the flowers! I must amit a couple of snails got my green peppers last year! we do love growing things
Penney