How to Get A Hot Celebrity On Your Book Cover, Starring Battlestar Galactica's Tahmoh Penikett

One of the best things about being a writer is that you get to cast your characters in the movie in your head. Sometimes it means making up a perfect hero with George Clooney’s smile, Brad Pitt’s eyes and Joss Whedon’s wit. Other times, the perfect leading man already exists.

When I started working on my next novel, which will probably be out in 2014, I already knew who my hero was. Canadian actor Tahmoh Penikett is best known for his roles as Karl “Helo” Agathon in the remade TV series Battlestar Galactica, and as Agent Paul Ballard in the Joss Whedon show Dollhouse. Tahmoh’s demonstrable ability to play a strong, driven but sensitive hero made him perfect for the role of my hero Kyle Peters, who also appeared in my debut book, Her Son’s Hero, as the former Olympic medal wrestler turned MMA trainer.

When I noted that Tahmoh Penikett’s Twitter account had been verified, I tweeted about it, and got this response. 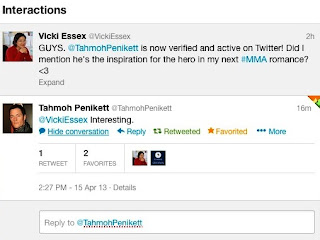 He and others went on to ask me about the project, so I obligingly told them. Then I asked if he would be interested in posing for my cover. This is what he said: 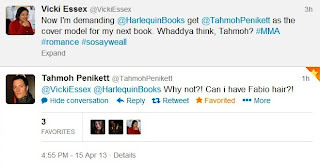 I couldn’t believe it! And I couldn’t let this go because how often does an author get to meet their inspiration in person, much less get them on the cover of their book?

So I started the #TahmohforHarlequin campaign. I’ve got a webpage and petition going, and after talking with my editor and other folks at Harlequin (it helps that I work there), I actually got Jayne Hoogenberk of Harlequin and Tahmoh to have a phone conversation. It’s *this* close to happening! You can read the whole Twitter exchange on Storify.

I don’t know where things stand right now, but I’m still working on the campaign. I want to demonstrate the awesomeness that is Tahmoh, and also show the world how terrific being a Harlequin model is. Okay, so the Fabio hair will be a talking point, but if this wonderful actor wants to do this, who’s to say there aren’t other actors who’d want to do it?

George, Brad...I’m looking at you.

Please come and visit my page, then sign the petition and tell your friends to sign it! I’m aiming for 5,000 signatures, but I'm only up to 142. Show Harlequin you want to see Tahmoh on my cover. Maybe we can throw the doors open to other celebrity appearances!

Who would you want to see modeling on a Harlequin cover and why? What kind of heroes would they play? Have you ever read a book and known in an instant who should be cast as the hero or heroine? Let me know in the comments below!
Posted by Vicki Essex at 1:00 PM

I signed, Vicki, and I am so impressed by the way you're making this happen. Can't wait to hear that it's happening!

I'm headed over to sign now, Vicki! I soooo want to see this happen :-)

What a fun idea, Vicki! I love Tahmoh! He'd make the perfect cover model. I signed the petition, and I hope you can get him!

I signed it, Vicki.. I loved Tahmoh in Dollhouse.

This is so cool. I met Tahmoh at Dragon*Con a couple of years ago, and he was a really nice guy. Hope this comes through.

How brilliant. I hope it all comes together for you.

I rarely associate the cover picture with what I imagine from the story, but in this case...

Wow, that is very cool. Going over to sign now :)

I signed, Vicki! And yay! Fingers crossed for this to come about!