Never Give Up. Never Surrender.


So here we are. About eighteen years after first admitting to myself that I was interested in writing, I can finally hold a book that I wrote in my hands. My mind is officially blown. 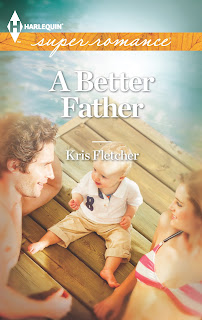 The first acknowledgement in A BETTER FATHER (did I mention it's on sale now?) is to the writers of Galaxy Quest, for that whole "Never give up. Never surrender!" thing. I know, I know.  It's such a cliché … but when it takes seventeen years to make that first sale, any and all mantras are needed. This one hit home for me because (a) it was short, (b) it was easy to remember, and (c) it was from a movie that was clever, funny, creative, and heartwarming – exactly the qualities I hope to infuse into my books.

Never give up. Never surrender.

Not that I always lived it, you know. I can't count how many times I gave up along the way. My agent loves to remind me of the five thousand or so emails in which I said to her, "I think I'm done." (Hey, she stuck by me for almost ten years before that sale happened. She's allowed to gloat.) But somehow, something always pulled me back. Sometimes it was an encouraging contest judge, or a new story that wouldn't let go. Sometimes it was something totally ridiculous, like being on the board of my local RWA chapter so I HAD to keep going to the meetings. Sometimes it was sheer stubbornness. Sometimes it was sheer laziness – as in, if I stopped writing I would need to take up something else, and the thought of starting over in a new field made me cringe.

Sometimes, I just admitted that I wanted this too much to let go.

Never give up. Never surrender.

On that day when I picked up the phone and heard my agent say, "It's The Call," I dropped to the floor and sat there for an hour, sobbing. By some miracle none of the kids walked in. It was just me, alone in my office, crying out seventeen years worth of hopes and fears and frustrations and overwhelming relief. By the time I dragged myself back to my feet, I was shaking with exhaustion and could barely talk – but it was a joyful kind of depletion, much like after giving birth. Which is totally, absolutely appropriate.

I'm glad I didn't know that it would take so long to make that first sale. I don’t know if I could have committed myself to a seventeen-year wait. But now that it's happened, let me tell you: it was worth every rejection, every sleepless night, every tear.

Never give up. Never surrender.
Posted by kris at 5:30 AM

You can't succeed if you quit - I'm not sure who that quote is from.

I wore a "Never give up, never surrender" t-shirt during my darkest querying days and then again when I was on submission, so I get the power of the mantra.

Mary, my fellow Questarian, I don't know who said that, either, but I like it.

JB, thanks for stopping in! Oooh, what a great shirt, and how wise to wear it during the hard times. Amazing, how powerful those words can be!

And yes, Jessica is an absolute gem. I am very, very lucky to have her in my corner.

Congratulations, Kris! So glad your perseverance paid off and I'm so excited to read your book *g*

Wonderful story of perseverance, Kris!!! I can't wait to read this book.

Takes lots of photos of your books on bookstore shelves and have fun celebrating your accomplishment.

Beth, my shelfmate, thank you! I love being in such excellent company. And hey - hockey heroes RULE, right?

Mary, thank so much, and yes, I need to get to the store in the next couple of days to get some pics. Thanks for the reminder!

Hi Kris--What an inspiring post. Congratulations on your sale and your perseverance. I'm also a never-give-up-never-surrender-er and as I look back, I see that when I finally got The Call, it may have come at the perfect time in my life...not that I would have minded being published fifteen years earlier, mind you.

Yay, Kris! So glad you persevered--and the reading world gets the fruits of your labors! And can I just say that your author photo is amazing! That suit--WOW!
(((hugs)))

Kris,
So glad you never gave up, never surrendered. I look forward to your book.

Loved Galaxy Quest, for the same reasons you do.

I guess if I counted the first book I started, I've been at this for almost twenty years. At this point I'm hangin on with sheer stubbornness. That and dread of having to get an "office job" some time in the near future.

Jeannie, I know EXACTLY what you mean about the timing. I would have liked it earlier, but now that I see how much time & effort is required, I am very grateful that the call came just before my youngest started full-day school. Guess someone knew what I needed far better than I did :-)

Aw, thanks, Pam. And ... hmmm, a suit? You mean the white sweater in my picture? If that's the one you mean, it's actually a thick, snuggly, cable-knit sweater I HAD to buy when we were in Russia. And yes, I HAD to - because we were there for my youngest's adoption, we had to go to court, and my suitcase got lost in transit. So, oh darn, new clothes required. I do love it. But whenever I put it on, I feel this need to swear that I will tell only the truth, the whole truth, and nothing but the truth :-)

Kristina, I soooo understand about the office job thing. I mean, I hear they make you wear PANTYHOSE in those places!

And even though I hadn't waited so long to sell, I did crawl into my husband's lap and cry...while he laughed. It's such an overwhelming thing to reach a goal like seeing your book in print. It's awesome! And I'm so happy for you :)

Congratulations, Kris! You had me from the "...eighteen years..." part. It hasn't been quite that long, or has it?, but I've definitely been wanting this for a long time and have been in and out of writing, depending on what's been going on in life, personally and professionally.

I happy you hung in there, and that you've shared your story to inspire those of us still hanging.

Loved reading your call story. Congratulations and I can't wait to read your book. Hockey heroes are my favourite.

Oh, Liz. I love the thought of you crying in your hubby's lap. That is sooo sweet.

I sent mine a text that said, "I got The Call." His reply: "What call?" Seriously, dude? But he did offer to bring home pizza. That worked :-)

Patricia, good for you for hanging on no matter what life has thrown at you. That's exactly the spirit you need to have.

Anne, thanks!!! I love seeing all the hockey heroes appearing. Anyone thing it's a coincidence that there are two hockey heroes this month from Super - a line edited in Toronto?

What a great story. And thank you from your readers for never giving up!

I bought the ebook :) Now to find some time to read it. Haven't read in days (unusual for me) but I've been so busy with work and a friend in the hospital...

Love that saying "never give up, never surrendor". I would wear a t-shirt with that saying :)

Syndi, thanks so much! Wow ... readers. That's a mind-blowing thought right there :-)

Snookie, oh, I so hear you on the time thing, but it sounds like your priorities are definitely in order. Thanks for downloading!