It's a funny story.

At least, that's what I will be saying in hindsight once this day is over. You see, I should be in Boston right now on vacation with my husband for his birthday. We'd planned this trip back in December and have been highly anticipating it. Unfortunately, Snowmageddon 2013 hit and we arrived at the airport to discover our flight, and pretty much all others to the eastern seaboard, have been cancelled.

I do not generally get overwrought about such inconveniences when forces of nature interfere with my plans. Instead of getting mad or frustrated at things no one can control, I look for silver linings buried in the snow.

So here's a list of the pros that went with the cons on this misadventure:

Con: only remembered last night that I had to clean the house in preparation for Lunar New Year, and did the fastest vacuum and clean ever.
Pro: came home to a clean house.

Con: entire trip had to be cancelled.
Pro: it's Lunar New Year on Sunday--my favorite holiday--and I had lamented missing the celebration for this trip. But now I get to be a part of the festivities with my family!

Con: arrived at the airport after an hour-long trek through the snow via public transit to discover our flight was cancelled.
Pro: spoke face to face with a rep from Porter Airlines and had the amount for my flight credited back to me in voucher form without hassle. 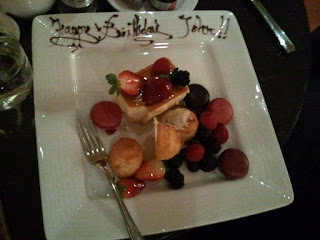 Con: went to get breakfast at Casey's, but discovered it was closed.
Pro: ended up at the Fairmont Royal York hotel's Epic lounge for a sumptuous breakfast buffet. While there, trying to recover from the blizzard, hubby and I tweeted about our cancelled weekend. @FairmontRYH picked up our tweets and sent a customer service rep down to the lounge with a cheesecake surprise for John to cheer him up on his lost birthday trip. A splendid surprise from the classiest hotel ever.

Con: hubby has thrown his back out.
Pro: we're here, where we can get free health care and not feel like we're wasting a trip if he ends up flat on his back for the rest of the weekend.

Con: my calendar only reminded me that I had to write this blog post this morning before I left.
Pro: You're reading this post now, aren't you?
Posted by Vicki Essex at 6:47 PM

Oh Vicki, I'm sorry. Any comfort that I enjoyed this blog post. Kudos to the hotel. See if they've got weekend packages AND rebook your trip immediately.
Karina

Vicki, I'm so sorry that your flight was cancelled, but I love that you've found so many 'pros' to ease the disappointment. Love what the hotel did for you!!!

Vicki ~ Sorry the blizzard wiped out your holiday. I hope your husband's back isn't so bad that you don't get to celebrate the New Year with your family.

Gong Xi Fa Cai or Gong Hei Fat Choi (I have no idea if either one of these is right) or just Happy New Year (which I know is right)!

Last year my brother turned 60 so it was a great dragon year for him. My sister turns 72 this year and oddly enough she is scared of snakes. I'm a rat. My husband is a rooster. We are going to my husband's sister's place with my brother and then we are all going out for Chinese food on Saturday. I know it's a day early but it works for all of us.

We probably won't have any chicken balls. If you have read Vicki's book Back to the Good Fortune Diner, you will know why I mentioned this. I really enjoyed the book Vicki. Loved Daniel's sub story as well.

We have a dish in Western Canada called ginger beef which started in Calgary. My nephew who lives in Ottawa has to get some every time he's back in Alberta. We do enjoy some of the Dim Sum items which are probably closer to true Chinese fare then most of the items on the menu.

Hopefully all the snow is under control in Toronto by Sunday so you can enjoy the day.

I hope your husband feels better and isn't too upset about his birthday trip being canceled. The Fairmont Royal York serve amazing food, I was there for a wedding several years ago and can't wait to go back some day.
I know what you mean about the snowmaggedon. I'm in London, ON and and a lot of places, including all schools, were closed today. It's almost midnight and I'm still waiting for them to plow our road.

I'm so sorry all your plans got disrupted by the bad weather. I hope his back gets better soon.

I'm a big believer in looking for silver linings!!

Silver linings. My neighbors set off fireworks at their front and back door at midnight Chinese New Year. They walk around all their vehicles with Roman Candles. And while I'm standing in the street enjoying it, they bring me really good wine to toast the new year. Happy New Year.

Oh I love this blog Vicki! Sorry on your missed trip, but hey if you had made it there prior to the storm hitting, you might be having a miserble time there instead of a fun birthday bash :). That last pro really made me smile. Hope you can reschedule your trip later, may not be on the birthday, but hopefully it will be nice weather. Kung hee fat choy!

Thanks all! Hubby is getting better, slowly but surely. We're waiting to see what the X-rays show. Meanwhile, good food and being home safe have provided me with some modicum of comfort. Will have to reschedule the trip and blog about it later. 8 )