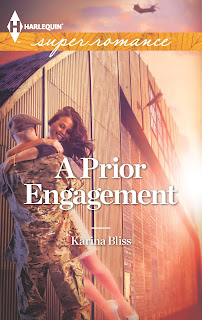 When I met my guy twenty-four years ago I thought he was cute  - and someone’s kid brother. It wasn’t just that he looked younger than late twenties, he was also more open, which after five bruising years living in I misread as naiveté.
But my point is, there was no thunderbolt moment, no recognition that he was my soulmate. It took nearly three years for us to realize we were, in fact, perfect for each other.
My take on the occasional news stories of ‘love at first sighters celebrating a Golden Wedding Anniversary’ is that it’s down to the same dumb luck that blesses every enduring relationship including mine. Whether you fall in love after ten seconds  or ten years, the ‘til death does us part’ commitment comes down to a daily renewal of faith.
But as a romance author I’m intrigued by the idea of instantly recognizing your soulmate.
So for my May release, A Prior Engagement I came up with a hero who believes in love at first sight and paired him with a heroine whose mother’s inability to distinguish between frogs and princes made her childhood a misery.
Through sheer sexy exuberance he seduces her into a relationship and then blows it by proposing after six short weeks. She rejects him badly and he deploys to before they can reconcile. And is killed.
Grief-stricken she accepts the engagement ring from his unsuspecting army buddies.
Nineteen months later, our hero comes back from the dead to find her ensconced in the bosom of his family. Ouch.
And once they work out that awkwardness they still have to find a way past their very different ideas of what constitutes true love.
So what do you believe?
Are you with actor Jeff Bridges who says; "“For me and my wife, it was love at first sight.”
Or are you on the side of humorist Sam Levensen.  “Love at first sight is easy to understand; It’s when two people have been looking at each other for a lifetime that it becomes a miracle.”

And if you'd like to go into the draw for one of my backlist go to the contest page on my site here.

Email ThisBlogThis!Share to TwitterShare to FacebookShare to Pinterest
Labels: Karina Bliss; A Prior Engagement; Love at first sight; Back from the dead story.

I don't believe in love at first sight. I do believe there is a spark of something that makes you want to know the other person better. You move on from that point and either the relationship flourishes and blossoms into love, or it withers and dies.

I'm looking forward to Prior Engagement :) I have read the others in the series and really enjoyed them. But then I enjoy all your books. I believe I've read them all, but will go check your back list to see if there's any I missed!

I'm not sure about love at first sight; I DO believe in lust at first sight, though.
Neither happened with me. I fell in love with love, I think, and only through many ups and downs through the past 32 years have I found that our love has continued to evolve, making me feel pretty lucky (wink wink nod nod).

Karina, I cannot wait to read this book. I think I'm going to go order it now so I don't forget. It is available now isn't it???

And congratulations on the 24 years. Jeff and I are working on 27 and it was love or at least lust at first sight for us.

So we're a bunch of pragmatists here, though Rogenna sounds suspiciously close to living the dream.
Other stuff I read when web-trawling on the subject.

Apparently smell at first sniff is equally important. Our genes need to be different enough to give our babies the best chance of survival and we can pick that up almost immediately too. One study found that women who sniffed sweaty shirts and ranked them in terms of attractiveness tended to rank shirts that belonged to the most genetically different men the highest.
We’re also subconsciously processing visual clues to his socio-economic status and past experiences. Eg: If he’s wearing a baseball cap and your last baseball cap wearing boyfriend was a loser, he’ll lose points for that.

A nice mix of romance and pragmatism.

I lived in a communal house with my husband for a year and there was friendship but no spark. Then we both went away traveling separately, came back and wham, the attraction hit us. Why? No idea. But we're still together nearly 30 years later.

Your book sounds fantastic, Karina. I can't wait to see how you get these two together.

Karina, I like the idea of a good balance of pragmatism and romance! This book sounds wonderful. Can't wait to read it.

Well I'm torn on the issue as my husband proposed to me on our first blind date. It wasn't totally a blind date as he had seen me at a dance the night before. I'm afraid it wasn't love at first sight for me although I liked him. It took almost a year for me to say yes but we have been married almost 45 years now. He did stop coming around for a couple of months and I realized how much I missed him. I'm really glad he decided to come back.

When I was younger I fell in love often. It was quite wonderful. But then I would always ask myself if I could live with that person, like everyday. And dh was the first person I loved that I could also live with. So we got married 3 months after we started dating, 42 years ago.

Mary, yes I think there are a lot of us pragmatic romantics out there.

Kaelee, aren't you glad your husband didn't give up? Clearly a keeper. And dogged persistence in a guy is tres romantic. Excluding stalkers :)

Linda S, sounds like you were mature beyond your years. Clearly it paid off.