Balance from Moscow to Pennsylvania 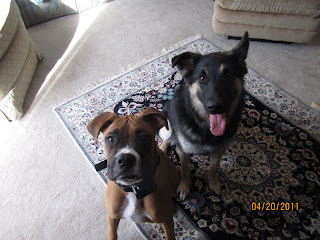 I competed on the balance beam when I was a midshipman at the U.S. Naval Academy. My body was never intended for hard tumbling or serious vaulting--I don't have fast-twitch muscles (except perhaps in my fingers). Though I was never the star of any team I've been on, I've always been the "depth." I used to resent it, then laugh about it. These past few weeks and perhaps months I've discovered that being the depth of anything in life is where it's "at"--it's where I find my balance. Take a look at the photo of my dog Misha and his best friend Handsome (the boxer). They are both puppies and need to wrestle and play daily to find their doggie zen (i.e. puppy nap so that their Moms get a break).
At present I'm in the midst of helping my hubby complete his tour here in Russia, move back to the States, see my eldest graduate high school and go off to college, help my youngest get settled in a new high school, see both kids finish out their years on a positive note, make the bittersweet transition of saying good-bye to dear friends and a loved country that's been home for 2 years, and anticipating our new home. Did I mention I'm praying our dog doesn't barf the entire flight back to the States, and that I can't wait to be reunited with our parrot whom we couldn't bring to Russia?
Oh, and I'm writing a new book for Supers that I can't wait to share--it's due to my editor August 1st.
Writing is important to me--it's my calling, something that will always be part of my life. I fight to protect my career and precious writing time.
I'm not a writing superstar (yet--I AM a positive thinker!) but in fact I'm one of many writers who make up the Harlequin Superromance imprint. My story, my book, is needed to keep the promise of this line to the reader going. It's part of a bigger picture.
Balance is the most challenging aspect of my life as wife, mother, writer, Navy wife, friend, mentor, mentee. It's a daily struggle to not veer off of my specific writing/work goals for the day to take care of something for my husband, my kids, even my country. When I don't achieve balance it's almost always because of a poor choice on my part, fueled by my forgetfulness that I'm needed for the depth of strength of writers (including me) everywhere. We're all connected and each thing we do whether it's write, teach, sell, buy, or whatever your vocation--it's important.
How do you find balance in your daily life?
Posted by Geri Krotow at 8:43 AM 13 comments:

In just under two weeks, my husband and I will be celebrating our first wedding anniversary. 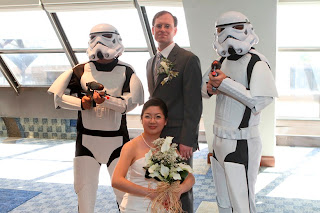 I can't believe a whole year has passed—with its full four seasons, various holidays, birthdays, family gatherings, ups, downs, and all the days in between—since the day our officiant declared, “By the power vested in me by the province of Ontario, and by the Power of Grayskull, I now pronounce you man and wife. Live long and prosper, May the force be with you, so say we all.”

Time flies when you're nerdy in love.

John and I met while we worked together in the magazine section at an Indigo Bookstore. I asked him out after about a year of getting to know him. We went steady almost instantly, and I introduced him to my parents within a week.

Despite the relationship-at-lightspeed beginning, it was almost nine years before he popped the question. It was on one of those summer days that can't decide whether it should rain or shine, and the sky was a sickly green-gray. We were at the Canadian National Exhibition, and I'd just trounced him at Whack-A-Mole. He bent to retrieve something in his backpack, and while I wasn’t looking, he got down on one knee and proposed to me with a shiny engagement ring right there in front of the Food Building. A double rainbow appeared in the sky that day. It was as rare and beautiful and amazing as that proposal. (No joke. It really happened.)

Our wedding day was gorgeous, with the most perfect weather, and everything (from my perspective) went off without a hitch. I had it all—friends, family, surprise Stormtroopers (my older sister’s gift to me), and a lightsaber duel with the newly minted hubby. After all, a wedding's not complete without sci-fi violence. 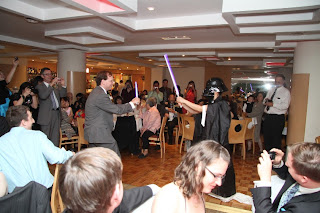 I imagine John and I will look back fondly upon that day for the rest of our lives. But deep down, I worry those memories will fade, or that life will get in the way of celebrating this event or other milestones. It’s already happened on a personal level: the older I get, the less birthdays mean. Each year just adds another wrinkle, another gray hair, until I realize I am subtracting more than I am adding to my life.

Riding this melancholy train of thought, I realized people celebrate sad events annually, too—it’s hard not watch the news without learning it’s the anniversary of some tragic event. Often, those headlines are marked with lingering questions, sadness, resentment and anger. People gather to remember what happened that day with heavy hearts, bearing tragedy with the same stoic pride one would a battle scar.

Whatever the occasion, the passage of another year seems to warrant some kind of fete, and the size and scale of that celebration is often in direct correlation to the depth of emotion experienced that day. It seems to be the reason why tragedy gets so much more attention. Not to say that such events don’t deserve fanfare: Never Forget applies to so many things: war, shootings, disasters…the what, why and how or tragedy are the building blocks of history.

Such maudlin thoughts make a girl flanked by Stormtroopers feel a little sheepish about celebrating something as trivial as the most expensive party in your life. It’s almost…crass. After all, what does my wedding day mean next to all the other things that happened in history on that same day?

“Well,” my inner husband tells me, because my outer husband is playing Civilization V, “it IS the day you and I declared our undying devotion to each other for the rest of the world to hear.”

And we did it with a healthy dose of awesome.

Then I realized something: An anniversary is just one day out of 365. There are still 364 more days to account for.

And so every day, I tell my husband how much I love him, how much he means to me. There are days we’re too busy for even the briefest of conversations, but we always touch, always hug and kiss to let the other know we’re there for each other. Through good and bad, we are each other’s constants. We’ve pledged to be together for the rest of our lives. And we’ll celebrate it not just on one awesome day, but every day.
For John: May we cherish many more days, months and years. Happy anniversary, my love. 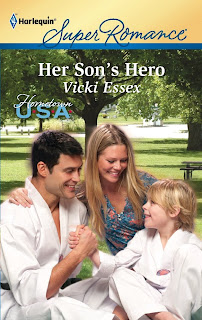 Her Son's Hero will be released July 2011 from Harlequin Superromance.

Visit www.vickiessex.com.
Posted by Vicki Essex at 3:39 AM 25 comments: